Windrush: Portrait of a Generation 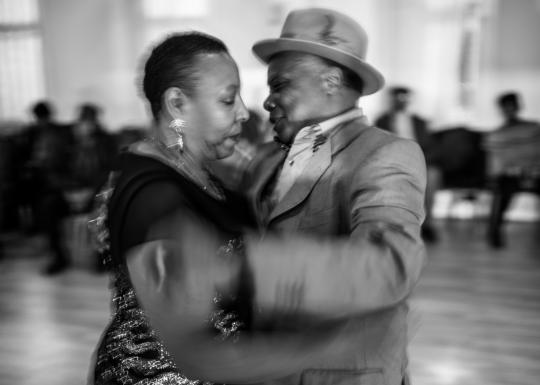 June 22nd 2018 marks the 70th anniversary of the arrival of the SS Empire Windrush at Tilbury docks in 1948. The ageing merchant ship brought 492 young hopefuls, nearly all of them Jamaican men, to help rebuild Britain in the aftermath of the war. This was a truly momentous moment in the evolution of Britain's cultural life: the arrival of those first passengers and ensuing steady flow of migrants from the Caribbean, often referred to as the 'Windrush generation', was a major step in the creation of a multi-cultural Britain.

Windrush: Portrait of a Generation is the latest photo-story by award-winning social documentary photographer Jim Grover.

The set of 60, predominantly black and white photographs and accompanying narrative, portray the current lives and traditions of this first generation of Caribbean migrants, who settled in south London and are part of its vibrant community.

The photographs are themed into groups of photo-stories that, together, encompass their daily lives; community clubs; customs, dominoes; dancing; faith; family gatherings; the Jamaican home; service to the mother country; funerals; and nine nights' (a tradition which marks the passing of a loved one). The exhibition leads with an opening portrait and personal story of Alford Gardner, now aged 92 and one of the tiny number of surviving original 'Windrushers'.

Many of the Windrush generation Grover photographed, now in their late 60s to 90s, still live in Brixton and Clapham in south London, as some of the very first 'Windrushers' were accommodated in the underground war shelter at Clapham South and sought their first jobs at the Brixton labour exchange. Over the last ten months, Grover was invited into their homes, clubs, churches, and memorials.

Jim Grover comments: "It's been such a privilege to spend time hearing such inspiring stories within our local community. I feel it's so important to document and celebrate the lives and traditions of this remarkable generation."

The exhibition is curated by Katy Barron, senior director at the Michael Hoppen Gallery. In addition, remarkable personal stories from the Windrush generation, based on interviews with Jim Grover, as well as extended photo-stories running as slide shows, that bring to life a typical Jamaican funeral, the playing of dominoes and portraits from the members of the Stockwell Good Neighbours Club, will be featured.

This will be Grover's second solo exhibition at [email protected] His first, held in 2016, was 'Of Things Not Seen' which told the story of a year in the life of a South London priest; it attracted over 7000 visitors, received extensive publicity and has been on tour to several locations across the country, most recently at the 2017 Edinburgh Festival.