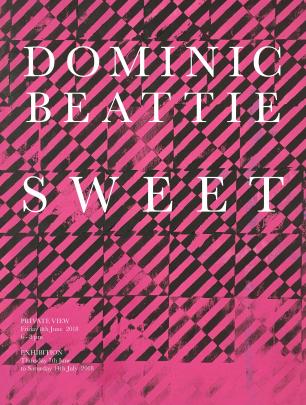 FOLD is pleased to present a solo exhibition of new work by Dominic Beattie, his third at the gallery. For this show Beattie presents painting, sculpture and furniture – all of which are ongoing concerns and are related by a skewed approximation of the domestic.

Textiles, ceramics and furniture are used as starting points for the creation of new paintings and sculpture. These ersatz versions of vessels and quilts have form, but are without function; they are made to be looked at. His colourful objects are indebted in their design to familiar British ceramic studios such as Troika or Clarice Cliff, however the brutality and expedience of their making expose a raw quality that is more akin to three dimensional collage.

Beattie’s new paintings are influenced by fabrics and textile design. With a nod to op art - repeat patterns are distorted and degraded, stamped and printed to the surface; they have the feel of tapestries or weavings, but this new process is paired down and stripped back, presenting a more immediate and urgent image.
To accompany the latest objects and paintings, Beattie has produced a series of new furniture pieces, they have function but their purpose is unclear, decorated in a similar manner to the paintings, they resemble chairs but are also art. Design emulating art and art emulating craft, in Sweet Beattie has created a body of work that is deceptively simple but full of contradictory flux.

Dominic Beattie, b. 1981, London, UK. Lives and works in London. Graduated from Camberwell College of Art, London, in 2004.