The Cobra Effect with André Hemer 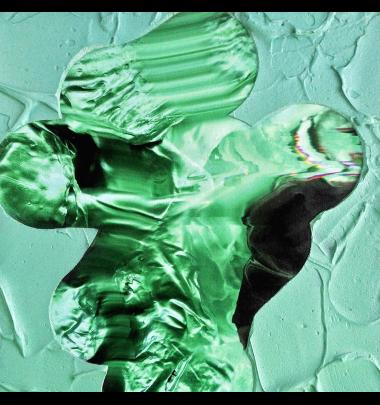 Here is a painting that is at once a finished work and an artist’s messy palette. It is a map, a vivid topography of colour. Petal-like daubs of paint explode in a maelstrom, and rich swathes of silk-like pigment have the shimmery sheen of smooth fabric. Elsewhere, pools of texture appear to melt into rough, liquid pumice, tempting the viewer to run their hand over its their surface. This map, this unknown country, is a heady mix of sensory colours and textural shapes. In The Cobra Effect (8 June – 21 July 2018) at Kristin Hjellegjerde London, Vienna-based artist André Hemer returns for a second show at the gallery, and his first solo, to present new works in his signature style.

For the New Zealand-born artist, the key to binding so many elements together lies in the use of light: he combines scanned images with physical paint, creating sculpted forms which are then scanned and transferred into digital images, only to be printed back again onto canvas and painted over and over again. By capturing landscapes as well as objects on a flatbed scanner in this way, he creates conflicting light sources on the canvas that actually serve to unite the disparate elements and imbues each work with an almost unreal, digital feel, as surfaces are highlighted to the point that they begin to look almost artificial. Yet, his impasto technique gives them a three-dimensional quality, the hand of the artist present in the thick swirls of pigment, but also, more subtly, in the melange of digitally manipulated images with which they are fused.

“I think when you look at the paintings, there are areas that are a little dirty in their process, a lack of perfection in the way the paint is put on,” Hemer has said. “It’s really exploring how those things can be intersected and how something can pass from a state of materiality to a digital image and then back again.” It is this intersection of the digital and the physical, the convergence of the two and three dimensional planes, that creates such a unique flattened yet vivid surface in Hemer’s works. They feel both deconstructed and reconstructed, flat yet sculptural – as if seeing time stretching and bending to encompass all dimensions and states of being at once.

This conflict – between the two and three dimensional, the digital and the painted, the then and the now – creates a state of anxiety, of tension. “'Maybe that latter state is the one that most of us find ourselves occupying: uncomfortable and anxious, but occasionally finding a way to push past that into something conceivably functioning,” muses Hemer. “This is The Cobra Effect, to create larger problems in our pursuit of solving the original simple one.