The Coal Porters At The 100 Club 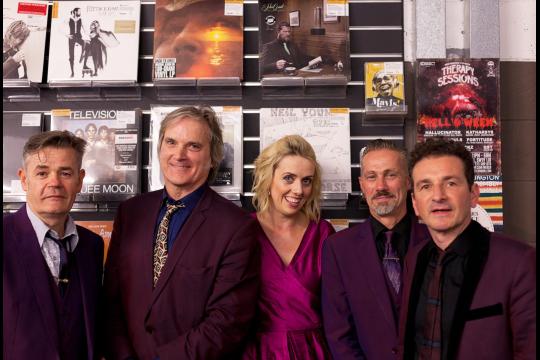 On Independence Day the Coal Porters bring their unique brand of acoustic/folk/county music to London’s legendary 100 Club on Oxford Street. Led by an American who is musically supported by a Scotsman, a Welshman, an Englishman and an English lady fiddler the Coal Porters will prove there is more to the Special Relationship than mere politics.

The Coal Porters are, as ever, headed by Sid Griffin on mandolin and vocals, recently described by Mojo magazine as “London’s favourite Kentuckian”, and rightly so. Griffin is fondly remembered from his days leading the much-missed, much respected Long Ryders, the very founders of Americana and alt-country.

Supported ably by Neil Robert Herd on vocals and guitar, Paul Fitzgerald on banjo and vocals, Andrew Stafford on doghouse bass and vocals, and the band’s not-so-secret weapon, the Royal Academy of Music’s own virtuoso fiddler Kerenza Peacock, every Coal Porters gig is memorable and July 4th will be no exception.

The most recent Coal Porters album is No. 6, produced by English folk-rock legend John Wood (Fairport Convention, Nick Drake, Squeeze) and was called by Uncut magazine “Arguably the Coal Porters finest yet, a deft, thoughtful and beautifully arranged set with an airy sense of melancholy”, while Rock N’ Reel magazine said, “the Coal Porters are no pastiche bluegrass band, the songs are genuinely heartfelt and the mandolin, Dobro, fiddle and autoharp are plucked with the deft lightness of genuine skill”.

So make the Coal Porters rare entry into their own backyard on July 4th your own celebration of independence. And bring your most red, white, and blue smile as well as your dancing shoes!