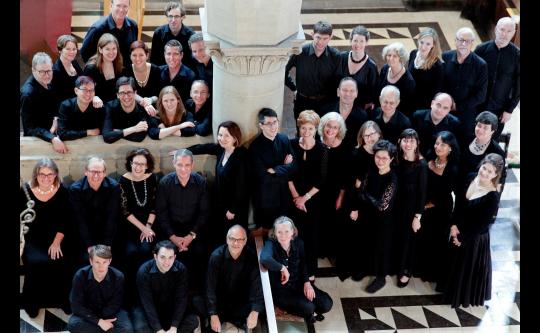 Londinium, chamber choir
Leanne Singh-Levett, piano
Andrew Griffiths, conductor
Londinium marks the centenaries of the deaths of Claude Debussy and Lili Boulanger by plunging into the heady world of early twentieth-century French choral music. Lili Boulanger, the first woman to win the prestigious Prix de Rome, lived for just 24 years; her prodigious talent is nowhere clearer than in her luxuriant and often-ecstatic works for choir and piano, such as 'Hymne au soleil', far too rarely performed today. We pair Debussy's classic 'Trois Chansons de Charles d'Orléans' with virtuosic transcriptions of his songs and piano music by the masterful arranger Clytus Gottwald, and our programme is completed with works by Fauré, Ravel, and the perennially popular 'Quatre Motets sur des thèmes grégoriens' by Maurice Duruflé.

Directed by Andrew Griffiths, Londinium is one of London's most versatile chamber choirs, having a reputation for diverse, imaginative and eclectic programming across the centuries with an emphasis on unjustly neglected or rarely-performed works, particularly of the twentieth century.

“A quite superb rich blend and balance... a collective conviction and real sensitivity to the text, and an engagement with the varied styles of each composer, that is massively compelling.” (Nick Barnard, MusicWeb International)