99 Problems But my Beard Ain't One 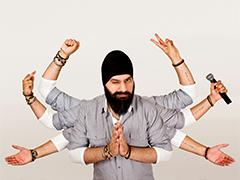 Hyde Panaser takes you through living his life with and without the beard, along with the 99 problems he's faced growing up. Ok, he can't go through all of them, but you'll get an overview. If there's ever anything you've wanted to ask a turbaned or bearded guy, chances are they'll be covered in the show.

Hailing from West London, where he did most of his growing up, Hyde Panaser brings to you his debut solo show. "99 Problems But My Beard Ain't One" deals with the subject of fitting in and social perceptions, where image is often more important to the outsider. Hyde uses his charm and charisma to talk about subjects that may be hard to hear for some. Growing up as an "outsider", being bullied, reactions to his image, living in a predominantly white society and moving to place he thought he would blend in, but didn't. All things that helped shape him - and his beard - to living in a multicultural society, but some problems just don't go away!

Hyde Panaser was runner up in The Olympia New Act Competition 2011 and Semi-Finalist in The Golden Jester Comedy Competition 2012. He has also been a finalist at The Comedy Store Gong Show numerous times. He has more recently been tour support for Nathan Caton (Live at the Apollo, Mock The Week). Hyde has produced, written and presented a number of hi-octane radio shows for community radios. Appeared as a speed dater in Gurinder Chadha's movie "It's A Wonderful Afterlife". Also featured on the BBC Asian Network as part of Meera Syal's Comedy Night, celebrating the next generation of Asian stand-up comics.