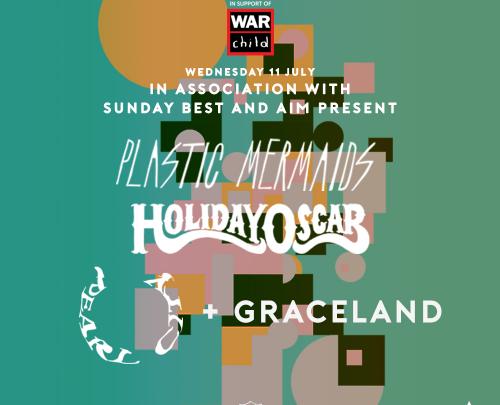 First tier of tickets SOLD OUT.


‘Plastic Mermaids combine the sounds of alt-folk, space-rock and chamber pop. The Isle Of Wight quintet echo the orchestral and extraterrestrial sounds of Spiritualized** Piano-led pop fantasy that The Flaming Lips would be proud of’. THE NME’


‘Their live show has become something of a magical experience featuring "handmade sets, lasers, projections and samples from films", as well as choirs and live string sections. THE LINE OF BEST FIT


‘These are huge soundtracks that’ll have you hugging your mates (or maybe even strangers). We get quiet bits, loud bits, a twinkling piano, the sound of a big orchestra and every now and then we experience the euphoria that Plastic Mermaids are capable producing in front of our eyes.’
LOUDER THAN WAR


After their recent signing to Sunday Best Recordings, Plastic Mermaids are set to headline London’s Camden Assembly on Wednesday 11th July 2018 for a Sunday Best charity event as part of the Emergence series in association with War Child.

Also appearing live at the event are label mates Holiday Oscar, Pearl City and Graceland with all proceeds from the show going towards War Child.

Plastic Mermaids in their own words, ‘We're really excited about playing this event to support the fantastic work that War Child undertakes… and look forward to meeting and performing with our new label mates. It’s our first London show in quite a while so we’re pretty excited, we’ve got a bunch more homemade electronics onstage this year and a load of new material too. Should be a great night with a healthy portion of the left field.’

Richard Clarke. Music Manager at War Child says, “War Child has been collaborating with the best of British music for more than 25 years to help some of the world’s most vulnerable children. We’re delighted to be continuing this and are constantly amazed by the generous support that the music industry gives us. It’s supporters like Plastic Mermaids that enable us to reach more children than ever, providing education, protection and livlihood opportunities for children forced to live with the brutality of war”

It will be the first UK headline show for the native Isle Of Wight’s Plastic Mermaids for over a year, as the 5-piece band have been finishing the recording of their much anticipated debut album; mixing piano ballads with soaring strings with electronic beats with delicate vocals, with the end result a crashing, swirling ethereal soundscape of beautiful and unique melodies. Renowned for their electrifying live performances, Plastic Mermaids will be back with new songs and a new stage show, and ready to captivate new and old fans alike.

Tickets for the show are still available to purchase HERE


For more info on Sunday Best Records, please check out:

Pearl City exists in an other worldly place where melancholic pop music reigns supreme and the future’s not so desolate. Formed by duo Nick & Greta in Manchester, their debut track ‘Flames’ that was championed by Huw Stephens who made it his BBC Radio 1 track of the week along with Phil Taggart and Steve Lamacq, alongside much praise from Dazed and Confused, Dummy Mag and Clash. Since their debut, shows have seen them support Dreamwife, Let’s Eat Grandma and Honeyblood.