Yelena Popova: Her Name is Prometheus 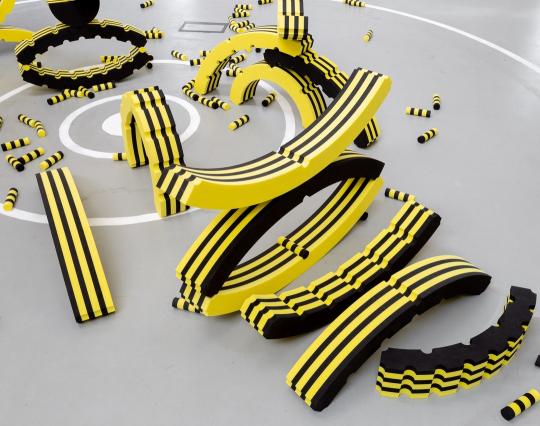 L’étrangère is pleased to present a solo exhibition of new work by the Russian-born, UK-based artist Yelena Popova.

Entitled Her Name is Prometheus, the show is comprised of sculpture, paintings, etchings, and tapestry developed during a residency at The Art House in Wakefield, in May this year.

Informed by her interest in nuclear history and developed from local research, Popova was inspired by the story of Klaus Fuchs – the theoretical physicist and ‘atomic spy’ who was incarcerated at Wakefield prison during the 1950s for supplying information from the Manhattan Project nuclear research to the Soviet Union during and shortly after the Second World War. Fuchs’s chief area of expertise was the implosion method, which led to the development of the Plutonium bomb.

Using a diagram of the molecular structure of Plutonium, Popova developed a mobile, interactive sculpture entitled Townlets (2018), which is made from the foam-like material plastazote and can be assembled in many different configurations. An accompanying series of woodblock prints, inspired by ‘figures’ in the traditional Russian game Gorodki, suggest different structures to build with the Townlets’ component parts. The audience is invited to explore and reconfigure the work in the gallery space and document their constructions on social media using the hashtag ‘#Townlets’.

Popova recently installed the work in a swimming pool, where it became a floating, sculptural set for a proposed synchronized-swimming performance entitled Her Name is Prometheus, which gives its name to this exhibition. Drawing in part on the decline of sporting goods manufacturing in the Yorkshire region, together the two works explore non-competitive, collaborative and performative approaches to sporting events.

A series of abstract paintings, collectively titled Model Kit (2018), are installed on the gallery walls as a counterbalancing structure to the floor-based Townlets. The notion of balance is integral to Popova’s practice, referencing not only the fragile state of equilibrium in personal relationships, but also the continuous balancing ‘games’ between political powers and ongoing tensions between East and West.

The exhibition will also include Lise Meitner Chair (2017), a work developed by Popova during a residency at Girton College Cambridge, a pioneering institution for female education in the UK. In this work, Popova reupholstered a found armchair with a custom-made tapestry as a tribute to Meitner, one of the most prominent women physicists, whose research in nuclear physics and quantum physics led to the development of nuclear fission. Meitner never intended her research to be used for military purposes and was firmly against the development of nuclear weapons. Whilst she received many awards and honours late in her life, she did not share in the 1944 Nobel Prize in Chemistry that was awarded exclusively to her long-time collaborator Otto Hahn.