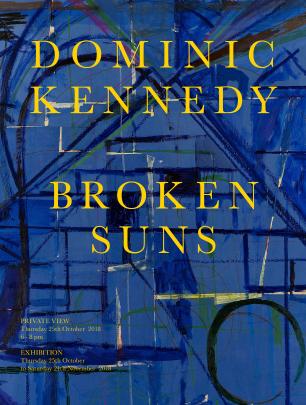 Fold is pleased to present an exhibition of new work by Dominic Kennedy, his first solo presentation in the gallery.

The starting point for this series of paintings comprises fragments of coloured paper collaged onto the surface of the canvas. Through this process, cracks are formed between the pieces of paper revealing the canvas beneath. This creates a fractured ground onto which subsequent painted and drawn marks are made. Each painting has a specific colour resulting from the initial choice of paper, which in turn, informs the rest of the palette in the painting. As you move through the gallery, each painting relates to the next through its own particular hue.

On the surface of the paintings, loosely drawn recognisable forms sit alongside more abstract patterns and playful marks. Collage is again introduced, this time using a variety of colours, some of which can be used to erase earlier stages of the painting. Other materials are also included such as pieces of felt, oil stick, wax crayon and pins, which are left over from the process of temporarily positioning the collage in place. Oil paint is applied thickly in some places, squeezed directly from the tube or applied thinly in others and allowed to drip across the painting, creating a rich and complex surface.

Simple child-like motifs such as houses, clouds, flowers, eyes and suns appear and re- appear across the work, creating an imagined space and a personal mythos where ‘myth represents a pre-history, an adolescence, something difficult, lost and barely graspable' (1). The scale of these paintings, their bold colours and forms, contrasts with the overall fleeting and fragile image held within.
Dominic Kennedy (b.1972 Kent U.K) studied B.A (Hons) Fine Art at Winchester School of Art (1992-1995) and M.A Painting at the Royal College of Art (2001-2004). Solo exhibitions: Repairs and Alterations, Ridgeway Road, London (2017). Recent group exhibitions include: Do Re Mi Fa So La Te, Perimeter Space, London (2018); Kaleidoscope, FOLD Gallery, London (2016); The London Open, Whitechapel Gallery, London (2015); Garten a.V, Kunstquartier Bethanien, Berlin (2015).