Krzysztof Gil: Welcome to the Country Where the Gypsy Has Been Hunted 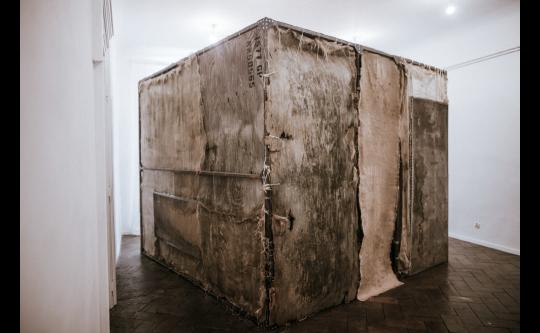 l’étrangère, in collaboration with Henryk Gallery in Kraków, Poland, is pleased to present Welcome to the Country Where the Gypsy Has Been Hunted, an exhibition by the Polish Roma artist Krzysztof Gil, curated by Wojtek Szyma?ski.

The show is comprised of a single installation, entitled TAJSA Yesterday and Tomorrow (2018), which takes as its point of departure the ritual of ‘Heidenjachten’ or ‘Gypsy hunt’, prevalent in Germany and the Netherlands from the seventeenth until as late as the nineteenth centuries.

The installation, a shelter-like construction made from raw canvas and fragments of wooden planks and connected with threads, ropes and bone glue, imitates the traditional, humble and temporary houses erected by itinerant Roma communities. Inside the shelter is a large panoramic tableau that depicts a procession of hunters, animals and human corpses, drawn with white chalk on a black background. The characters have been inspired by the Rembrandt painting, The Anatomy Lesson of Dr. Nicolaes Tulp (1632), in which Dr Tulp presents a public dissection to members of the Amsterdam Guild of Surgeons. Gil’s drawings of the hunters’ trophy heap, which includes a deer, a hare, a bird and a Roma, perversely resembles the aesthetisised paintings of the Dutch still life tradition.

Both legally and socially marginalised throughout their history, beginning in the fifteenth century Roma peoples were dissuaded from following their traditional lifestyles for fear of severe punishment or enslavement. The sixteenth century was marked by anti-Roma legislation passed by the then Holy Roman Emperor, Maximilian I, which meant that any Roma individual captured anywhere throughout the imperial territory could be subjected to torture and extermination. In 1530, Roma were legally banished from England, and in 1540, from Scotland. In the seventeenth century, a law was in force throughout Germany and the Netherlands according to which anyone could kill Roma without liability, thereby establishing the custom of Roma hunting, or ‘Heidenjachten’. The hunts were official, co-organised by the army and police, and became a form of public entertainment, often with cash prizes awarded for a hunter’s success.

Krzysztof Gil’s family originates from the Burgetka Roma community who settled in the Polish region of Podhale in the fifteenth century. A diverse yet stateless population of approximately 9 to 12 million people, Roma people speak many languages, practice different religions and have varied customs. For this exhibition, Gil has produced a soundtrack that accompanies the installation, which juxtaposes the remote history of persecuted Roma people with his own family history and the contemporary moment. The sound component consists of a recorded conversation between the artist and his grandmother, in which she tells the story of her father, who was murdered in post-WWII Podhale after making remarks that called into question the quality of work of his Polish colleagues. His death was concluded to be an accident by doctors and the authorities, and the perpetrators went unpunished.

The exhibition is supported by the Municipality of Kraków, Poland and the Polish Cultural Institute, London.