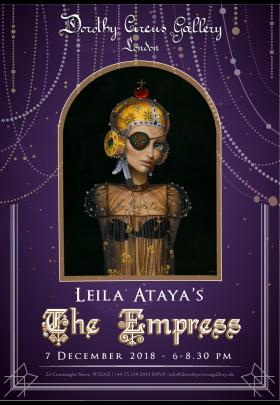 Dorothy Circus Gallery is proud to present a new series of artworks by Pop Surrealist painter Leila Ataya. The Empress will be the first UK exhibition of the Russian-born, New Zealander artist, and will feature three new paintings and one drawing. ?

The title of the exhibition The Empress takes inspiration from the nature of the souls that the artist portrays. Strong and wise beings, Ataya’s female souls have lived multiple lives in different eras, and they have been leaders, revolutionaries and queens.?

On the occasion of the 100th anniversary of women’s suffrage, Ataya’s women in The Empress will reminds us of strong figures from the past, who have fought for their rights and been shut down and criticised for their emancipation: from the Blue Stocking Society - the English eighteenth-century informal organisation which sought to expand women’s social and educational rights - to strong independent state figures such as Marie Antoinette, Catherine The Great, and female warriors like Joan of Arc?

Combining influences from traditional Russian Art, Iconography and Decorative Art, Leila Ataya will present meticulously executed artworks, filled with strong symbolism and dominated by ethereal women and refined creatures. The characters subtly reflect each era they have lived in, revealing the burdens and the pleasures experienced during each of their journeys, while acquiring knowledge and power. The bright eyes of the female figures project their mood and sensibility, while the thin and long bodies detach them from earthly and human connections, gracefully capturing the fragility and the beauty of life.?

The centrepiece of the show will be “Without An Eye”. The impenetrable darkness of the background is contrasted by a highly detailed portrait of a soul which has lived as a Celtic shaman, a queen, and a general, fighting in wars and experiencing the burden of burying her own children. Breaking down the boundaries of time and space, “Without An Eye” is a timeless representation of strong, independent and powerful female souls, who are loved and hated throughout their lives, encountering endless obstacles and experiencing multiple failures. However, a message of hope for a brighter future transpires through the painting. Although ‘broken’, the character stands straight, confidently looking at the viewer. The line ‘No Regrets’ tattooed on her chest, proudly conveys the strong personality of a woman who has fought, learned and fully lived her life, taking advantage of every lesson learned during her journey.?

?Using canvases as a storytelling medium, Leila Ataya looks at drawing the attention of the viewer to the surreal and stimulating an emotional response to the stories of her subjects. Through ambiguous narratives, the works on show will entice the visitor into the realm of strong travelling female souls. The Empress will also invite and encourage the viewer to reflect on and explore the stories of these female souls, and think of the women who, throughout history have stayed strong, endlessly battled for their rights and dreamed for a fairer and equal society.

ABOUT THE ARTIST
Leila Ataya was born in Moscow in 1979 and is now based in New Zealand where she moved with her family in 1996. In 2001, she graduated at the Elam School of Fine Arts, University of Auckland with a BFA in the Discipline of Painting. In 2004, Leila Ataya founded Art School, an educational project that offers art classes to children and adults.