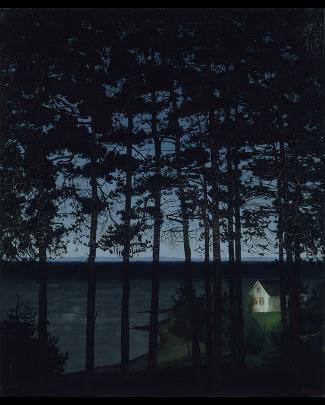 Dulwich Picture Gallery's first show of 2019 will showcase the highly original landscapes of the Norwegian symbolist artist, Harald Sohlberg (1869 – 1935), arguably one of the greatest masters of landscape painting in the history of Norwegian art. Timed to coincide with the 150th anniversary of Sohlberg’s birth it will be the first major show of his work outside of Norway.

Like Edvard Munch, Sohlberg strongly denied the influence of other contemporary artists, disassociating himself from discussions about where he belonged in the history of art. Instead, he relegated the origins of his artistic awakening to his own psyche and to the intense stories and mythologies of the Norwegian land. Consequently, Sohlberg’s paintings depict the wilderness of the Nordic landscape, the soft beauty of the flower fields and the harsh cold of the winter.

This major retrospective will show the breadth and ambiguity of Sohlberg’s art whilst revealing its relevance beyond Norway’s borders. It will trace Sohlberg’s entire artistic career, from his earliest production as a twenty-year-old in 1889 through to the last year of his life and reveal influences such as Norwegian Naturalism and Symbolism, which he was exposed to during his training in Copenhagen and Christiania. The exhibition will also include Sohlberg’s iconic landscape, Winter Night in the Mountains, regarded as the ‘National Painting of Norway’.

This exhibition will also feature a new installation by Mariele Neudecker, made in response to the paintings of Harald Sohlberg.