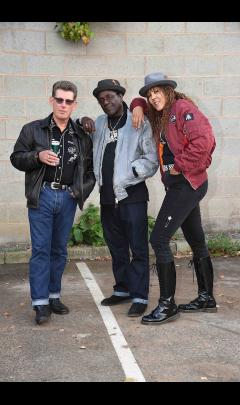 This exclusive concert will feature the guys who have been flying the Ska and 2 Tone flag through the decades with their legendary tours, albums and incredible performances. Includes original members from The Specials, The Beat, Dexy’s Midnight Runners, General Public and guests.

Neville Staple, Legendary front man of The Specials, Fun Boy Three and Special Beat, also known as The Original Rude Boy, is credited with changing the face of pop music not only once but twice. His celebrates a super 40-year career in the music business which is well documented and started out from the early days with Ray King, Pete Waterman, The Coventry Automatics and his Jah Baddis Sound System, before taking to the stage with The Specials during the famous ‘Clash’ tour.

Neville’s 2-Tone legacy is huge. 2019 is the 40th Anniversary of the 2Tone Movement. “The way we brought ska to the mainstream was by mixing Jamaican music with the English style, which at the time was punk. The movement helped to transcend and defuse racial tensions in Thatcher-era Britain. The actual black and white chequered imagery of 2 Tone has become almost as famous as the music itself”. Neville states, “I remember the massive reactions to the hit songs like Ghost Town, Too Much Too Young and Gangsters and fans still write to me about my rugged, energetic and fun stage presence”.

"Out on his own, still pretty special" Record Collector:

“Nothing came close to the sensational Neville Staple Band who really got the party started and had the masses dancing along” Anita Merritt-Exeter Express & Echo.