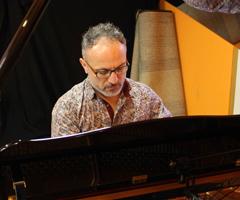 Tonight we feature a really impressive pianist who, although still relatively new to the UK scene has already made quite an impact. A native Italian from Umbria, Marco Marconi initially studied classical piano before moving on to study Jazz at the Music Conservatory of Perugia. Since then he has established himself as one of Italy's leading jazz pianists. He had highly successful appearances at the Cheltenham Jazz Festival in 2009 and the Lancaster Music Festival in 2011, which prompted his decision in 2012 to move to the UK permanently. He has been working primarily with his own trio, producing his first album "Nordik" in 2016, released on the iconic UK label 33Jazz. Marco has a truly impressive technique, which allied with his classical knowledge and jazz sensibilities creates a unique sound and approach to both his originals and classic jazz standards as well as informing his jazz interpretations of pieces from the classical piano canon. Tonight the trio, featuring Tom Farmer on bass and Emiliano Caroselli on drums, will be performing material from their well-received second CD "Trialogue", once again released on Paul Jolly's 33Jazz. As Paul says, the gig will give an opportunity "…for London audiences to hear one of the most creative and innovative pianists currently working on the contemporary scene". The program, as described by Marco, "will feature a mix of original compositions plus really well known songs that I have arranged in a jazz setting...including a...medley of music from Star Wars". Now that you can't miss!

"It isn’t often you discover a performer whose creative ability takes your breath away in the first 30 seconds of hearing their music... Marco is a breath of fresh air for…Jazz fans everywhere" JazzBitesRadio.com; "An inspirational feast of stylish...jazz" Stratford Jazz; "a remarkable musician" Cheltenham Jazz Festival