Nine Lives brings a hint of the Caribbean to Burns Night 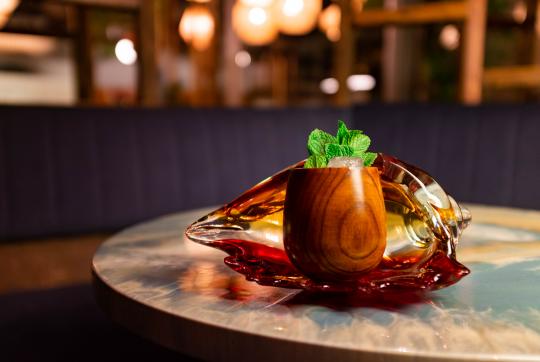 For something special this Burns Night Nine Lives have partnered with the world’s most awarded single malt whisky, Glenfiddich 21 year, to create their bespoke cocktail pairing experience. Made unlike any other whisky in the world, Glenfiddich 21 year old whisky is aged in barrels which have been seasoned with rum, giving the whisky a spicy warmth of the vanilla and toffee sweetness, allowing for the character of the Caribbean to shine through. For one night only, Nine Lives have been working with Chef Chris Evans-Gordon to create a one-off food paired cocktail menu, taking inspiration from both Scottish and Caribbean roots.

Expect expertly crafted serves including Letters from the Caribbean is made using Glenfiddich 21 year, pink grapefruit, maraschino liqueur, lime and sugar and will be served with ‘Pepperpotaleekie Soup’ consisting of blackened chilli, leek and potato; The Old Caribbean made with Glenfiddich 21year, lime, sugar, mint and Champagne will be accompanied with dill cured salmon, lime & habanero salsa. Burns Night wouldn’t be complete without an Ode to the Haggis...but this time it will be jerked.

Nine Lives is a neighbourhood bar located in a Victorian basement in London Bridge, full of sublime cocktails, warm welcomes & a killer soundtrack opened its doors. The owners of Nine Lives bar; Allan Gage, Emma Hutchison and Tom Soden are inspired by their frequent work with the world’s best bartenders and living by a sustainable ethos. Everything from the magnificent repurposed sound system to the interiors and uniforms are reclaimed.