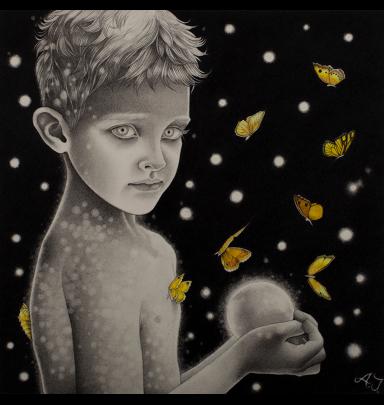 Dorothy Circus Gallery London is thrilled to present a brand new focus exhibition by the internationally renowned Italian artist Alessia Iannetti, titled The Little Boy and the Glowing Globe. For this show, Iannetti showcases twelve miniature graphite and watercolour illustrations from the tale of the same name “The Little Boy and the Glowing Globe,” written by the Swedish musician Anna von Hausswolff and her sister, the film director Maria Von Hausswolff.

Alessia Iannetti has created twelve illustrations for this surreal tale, connecting the words of the writers to the evocative language of art. Among these, two key artworks stand out: The Weep and The Glowing Light, which embody the crucial fragments of the story by depicting the suffering tears of a child whose soul is trapped and his/her subsequent rebirth through the light of hope. The Glowing Light, in particular, depict the end of the story, when the spirit of the protagonist becomes free to wander around the world thanks to the light he found inside him.

The story of “The Little Boy and the Glowing Globe” deals with a whole existence lived in the darkness of a room. A tale is suspended in a remote place and there is nothing in the darkness that can unveil it. Mysterious and undefined characters dwell in the rooms and the open spaces of the tale, which remains however ambiguous as if suspended in a mystic dimension. A revelation happens when the main character turns into a spirit: henceforth, this spirit begins its eternal search for the light. A nocturnal parade and a sad melody guide the salvific spark of the child through shining elements that break the darkness and bring revelation; a silent passage from matter to spirit, from fear to quietness.

The tale is part of the children benefit book project Stories for Ways & Means, edited by Waxploitation Records and illustrated by Alessia Iannetti. The project is committed to helping the children all over the world who suffer the consequences of war, and has been developed throughout the last ten years by Jeff Antebi, founder of the Californian record label Waxploitation Records.
This huge project combines music, figurative art, and literature and has realised the 350-page book of tales Stories for Ways & Means, which includes not only tales but also multimedia contents and has many rock music stars participating as co-authors: Nick Cave, Tom Waits, Justin Vernon (Bon Iver), Kathleen Hanna (Bikini Kill, Le Tigre), Pixies's Frank Black, Laura Marling, Devendra Banhart, Alec Empire, Alison Mosshart (Kills, Dead Weather), Eugene Hutz (Gogol Bordello), Gary Numan and many others. All the proceeds of the book sales will be donated to Room to Read, 826 National, Pencils of Promise and WAR Child - organisations dedicated to the li