Are They All Yours 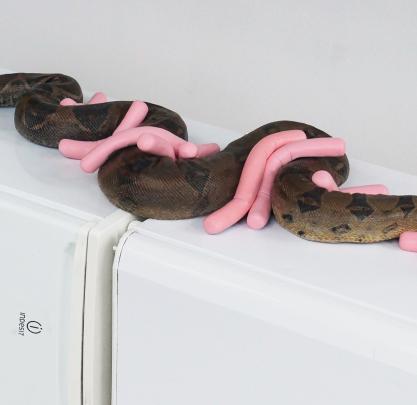 On paper it may seem that the organic sculptural works of taxidermist Polly Morgan are the antithesis of multidisciplinary artist Robert Cooper, whose digital and performance work lives within the internet, mediated through technology. Although Cooper’s interest in the synthetic and mass-produced does counterpoint Morgan’s focus in ‘cannibalistic, predatory and unnerving’ Animalia, both artists’ aesthetic is grounded in the manipulation of bodies.

Whilst Morgan’s craft sees her skinning and manipulating the cadavers of animals to create physical sculpture, Cooper (usually) uses his own body, as transferred through computer to screen and disseminated through Instagram, which is also how the two artists met and began collaborating.

The artists found they treated their images differently, Morgan being the more guarded of the two, understandably so as the very nature of Cooper’s online work is to be viewed, edited and reposted endlessly, whereby sharing the images is to lose his grip on them, and consequently his ownership of them. This exhibition brings together both artists’ preferred mediums and looks at how they have influenced and affected each other, Cooper describes learning taxidermy in Morgan’s studio as exposing himself to ‘all the sensory stimulation that is lacking when working on a computer’.

A large taxidermy python, shown publicly for the first time here, celebrates their artistic collaboration. The monolithic reptile, an unsettling being to face, has been infested by three-dimensional ‘doodles’, clambering and burrowing into its folds. Persistent and unrelenting, they represent obsessive niggles; a feeling or memory that nudges its way into your conscience. They inhabit the space and share it with mundane objects; a cap, a rucksack, a freezer, and in doing so, they articulate hangovers from the virtual world, insidiously worming their way into reality.

Frozen sculptures are exhibited in a glass-lidded chest freezer, intended to further consider technology’s intrusion on reality; these works only exist as long as the freezer remains plugged in and fully-functioning. The frozen atmosphere ensures the preservation of the decaying organic material, and, just as it is possible to cryogenically preserve a body after death, there are now companies who offer to keep a digital presence going after one’s demise, between technology and the internet we can preserve both the physical and the psychological.

Paradoxically, the freezing environment can not only preserve death, but it also has the ability to withhold life, keeping embryos with the potential for life in indefinite stasis. Here, technology directly interrupts the natural course of death – conserving the body from innate decay yet also withholding the possibility of new life.

Both the exhibition title and names of the works included have been lifted from internet searches, collectively written. A word or two typed into a search engine brings up a list of popular searches, each subsequent search is influenced by the last, as the computer seeks to embody the mind of its user, left to chance yet inevitably predictable. Each element of this exhibition, from the artists meeting to the given artwork titles have developed through the mass of data we commit to the internet. Patterns may emerge and probability can be calculated, but there is still serendipity to be found within the public mass-sharing of information.