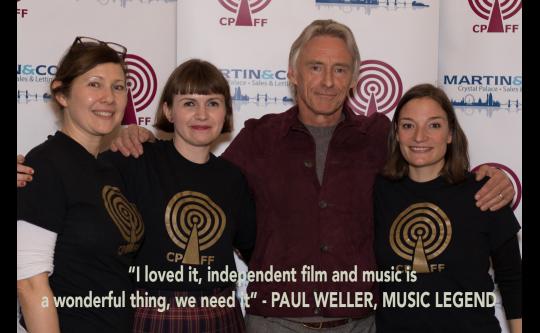 CPIFF receives films from all over the globe and screens only the very best of them with fabulous food and drink in funky venues, including the Everyman Cinema Crystal Palace – their incredibly plush, flagship cinema, the Picturehouse West Norwood and the architectural magnificence of Stanley Halls and Anerley Town Hall. The film quality is remarkable and each night is a social event to remember and a one time opportunity to catch most of these incredible films! Also, lots of film makers fly in from around the world for Q&As. Many, who attend lots of film festivals, comment on the stand out nature and high quality of CPIFF compared to other festivals.

Mike Reiss, writer of the Simpsons since it began, said:
“You run the very best festival we’ve ever been to – and we’ve been to a lot! This is as good as it gets!”
Music legend Paul Weller said “I’ve loved it and we need it, the whole independent movement is very important”