Tutankhamun: Treasures Of The Golden Pharaoh 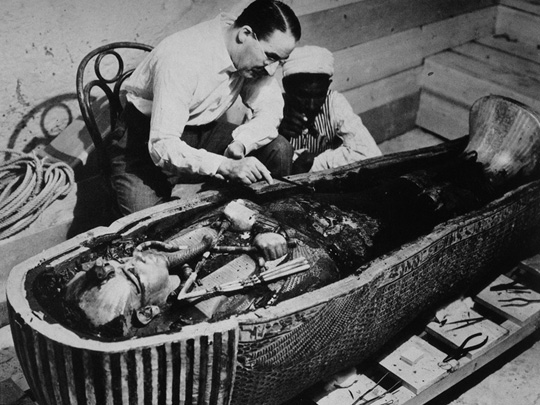 Commemorating the centenary of the discovery that captivated the world, the largest collection of King Tutankhamun's treasures ever to travel out of Egypt will open at the Saatchi Gallery in London for a limited run beginning Saturday 2 November 2019, and until 3 May 2020.

Produced by the Egyptian Ministry of Antiquities and IMG, and presented in London by Viking Cruises, the TUTANKHAMUN: Treasures of the Golden Pharaoh world tour features more than 150 original artefacts from Tutankhamun's tomb, with 60 on their first journey outside Egypt. Visitors can discover the legend of the golden king before the historic treasures return to Cairo to be permanently housed with Tutankhamun's full collection at the new Grand Egyptian Museum.

The legend of Tutankhamun captured imaginations globally when, in 1922 his tomb was unearthed by British explorer Howard Carter and financier Lord Carnarvon. An instant worldwide sensation, public fascination surrounding the boy king - and the only Ancient Egyptian royal tomb ever found intact - has continued for decades, with exhibitions in 1972 and 2007 drawing record crowds of well over one million visitors in London. Those exhibitions contained under 55 items from Tutankhamun's tomb.

"To celebrate the 100th year anniversary of the discovery of Tutankhamun's tomb, Egypt is sending 150 masterpieces to tour all over the world. Please see them, visit them, before they return back to Egypt forever," said Dr. Mostafa Waziry, Secretary General of the Ministry of State for Antiquities, Egypt.

TUTANKHAMUN: Treasures of the Golden Pharaoh explores the meaning of the items in the royal tomb and the dual storyline of its discovery against all odds. The pharaohs that succeeded Tutankhamun nearly managed to erase him from the history books. Had Howard Carter not persisted in his quest, the boy king's legacy and treasures could have been forever lost to the sands of Egypt.

The ancient Egyptians believed that death was also a rebirth. Through nine immersive galleries that incorporate digital content, contextual material, audio and custom soundscapes, visitors will follow Tutankhamun's passage into everlasting life, discovering how his funerary objects were used on the perilous journey. As they explore his life, visitors will become part of perpetuating the Pharaoh's immortality: to speak his name is to make him live.

Unlike past tours, TUTANKHAMUN: Treasures of the Golden Pharaoh is exclusively focused on interpreting the significance and meaning of the king's burial items.