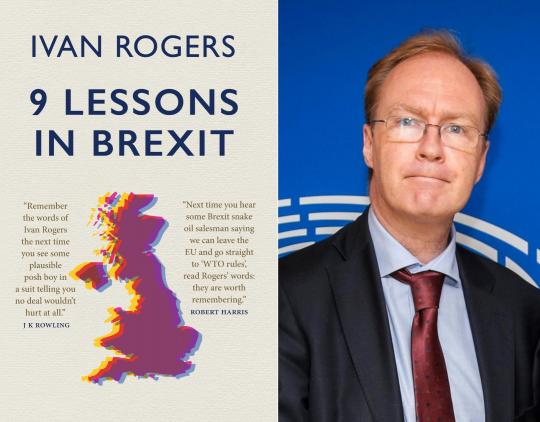 "Remember the words of Ivan Rogers the next time you hear some posh boy in a suit telling you ‘no deal’ wouldn’t hurt at all and might even be a jolly good thing.”
J.K. Rowling

Ivan Rogers is a former British civil servant, he was Principal Private Secretary to Tony Blair from 2003 to 2006, and served David Cameron as Prime Minister’s Adviser for Europe and Global Issues from 2012 to 2013. From 2013 to 2017, he was the UK’s Permanent Representative to the EU and was the UK’s most senior negotiator with other Member States and the European institutions. Since his resignation in 2017, Rogers has not spoken publicly. Now he shares his experience and knowledge ahead of Britain’s scheduled March 29 exit date from the EU.

Two and a half years after Britain voted to leave the European Union, the political debate over Brexit seems as intense and as complicated as ever. Who and what can we trust, and how on earth do we make sense of it all? Ivan Rogers is uniquely placed to tell some home truths about the failure of the British political class and the flaws, dishonesty and confusion inherent in the UK’s approach to Brexit so far.

Ivan will be talking about the ideas in his book 9 Lessons in Brexit. This event is for anyone who wants to understand what has been going on and what our post-Brexit outcomes can be, if they are to be based on anything other than wishful thinking.

“Ivan Rogers on blistering form, setting out the unpalatable truths of Brexit that effectively got him sacked as our man in Brussels.”
George Parker, Political Editor, The Financial Times