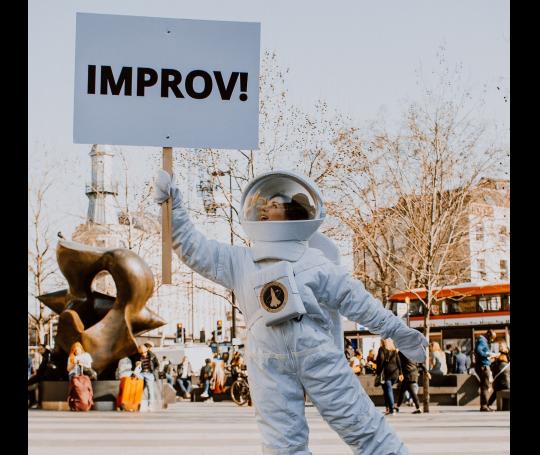 The Hoopla UK and Ireland Improv Festival, London’s greatest improv festival, is set to takeover London Bridge this April. Gathering for the last weekend of the month to celebrate togetherness, this jam-packed festival will be showcasing 18 of the best improv groups from across the UK and Ireland with acts flying in from Dublin, Glasgow, Nottingham, Leicester, Birmingham and many more. This exciting festival is brought to life from the company behind the UK’S first improv theatre.

Improv classes are now one of the fastest growing new hobbies sweeping the UK. Starting as a weekly workshop above a pub in Balham, they are now the UK's biggest improv school and run multiple courses every night of the week in venues across Central London as well as regularly running corporate workshops to clients including Google, Facebook, and Accenture. Responding to, and celebrating, the explosive burst of interest in improvisation groups and theatre, Hoopla are throwing one big weekend festival bringing their favourite companies to the capital to create performances inspired by spontaneity and collaboration.

There is an incredible selection of companies to see including the hit Dreamweaver Quartet, who turn dreams into a reality within an improvised musical dreamscape, The Actor’s Nightmare, which sees the original improvisers from Whose Line Is It Anyway and Comedy Store Players join forces with a new generation to improvise an entire play with amazing characters and relationships. With their aim to promote diversity in improv and comedy, Hoopla are delighted to have the UK’s first ethnically diverse improvisational theatre company in JumProv join them for the Festival.

Hoopla Impro was founded with the idea of bringing people together through improv and creating a warm, fun and friendly environment where people can come together and be themselves. They now run workshops every night of the week in six locations around Central London, with even more starting later this year. A real confidence-boosting experience, its aim is to stretch your mind as well as your perspective.