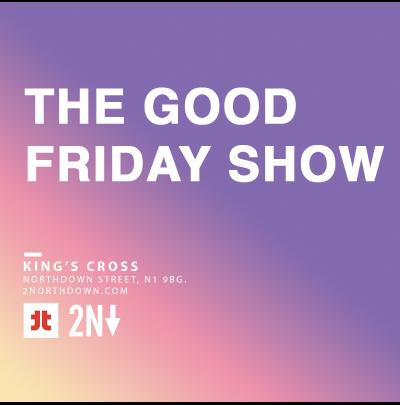 The Good Friday Show is your new favourite comedy night. Once a month gracing our cosy garage stage are the very best comedians around. From 6.30pm come down to London's coolest comedy club for drinks deals, music and the very best in comedy hosted by 2Northdown's resident MC Garrett Millerick. It’s always a friendly atmosphere for the Good Friday show. Come and join us for an action packed, energised night, filled with beers, laughs and good vibes only.

This month our line up features the amazing Garrett Millerick and loads more!

Garrett Millerick
Garrett Millerick is an acclaimed stand up comedian, writer and director. He is an increasing force to be reckoned with on the UK Circuit. In the few short years years since debuting in new act competitions he has established a reputation as one of the stand out live acts of his generation.
‘a virtuoso display of unforgivingly grumpy stand up delivered with fire in his soul’ Chortle