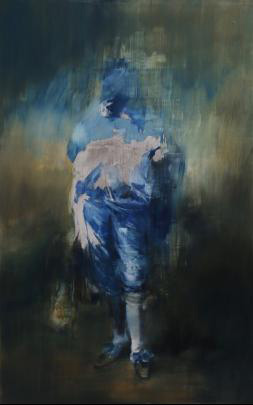 This May, Unit London presents a new solo exhibition by British artist, Jake Wood-Evans. Legacy & Disorder centres around Wood-Evans’ fascination with combining the past and present. The artist’s large-scale oil paintings and drawings convey an altered atmosphere and re-appropriated view of 18th century subjects, including; portraiture, seascapes and figurative compositions.

The painterly works draw on the legacies of Old Masters through a layer of abstraction, depicting familiar, yet obscured content matter – updated for the digital age. Taking influence from the work of John Constable, J.M.W Turner, Sir Edwin Henry Landseer and George Stubbs, among others, Wood-Evans’ next generation painting style retains recognisable elements that allude to the conventions of art history. Wood-Evans’ ethereal, unsettling pictures evoke a haunting beauty; as the artist describes, his work is ‘a process of conflict with the ambiguous space between representation and abstraction’.

Legacy & Disorder follows Wood-Evans’ recent 2018 museum exhibition REPORTRAIT at the Nottingham Castle Museum and previous solo exhibitions, Subjection & Discipline and Transitions with Unit London. The upcoming body of work is focused around the creation of a transient, enveloping yet imploding, space for his fragmented historical figures to inhabit.

Coming to this body of work via a period of concentration on landscape paintings last year, the artist – much like one of his biggest idols, Thomas Gainsborough – has found his interest piqued in the pictorial setting of a subject. The area that surrounds his central figures has become a fertile ground for a new energy and experimentation. The works evoke a dream like version of the countryside idylls and stately landscapes found in the portrait backdrops of powerful and influential 18th century figures.

The paintings are aesthetically both joyful and profoundly unnerving, suggestive of the uneasy dreams of an English ruling class that cannot quite believe in its own rhetoric and grandeur. The figures, vibrating with ambivalence, are located in a space that refuses to stand still; all is in change and movement.

In a departure from his previous body of work, the surface of Wood-Evan’s new canvases have a smooth, glossy and delicate finish, despite retaining an intense richness of perspective and volume, achieved through the artist’s use of colour and light. Alongside precise attention to detail and a studied craftsmanship, there is an obvious joy in experimentation and looseness of application. Reworking and reusing previously painted and discarded canvases introduces an anarchy of shape, form and colour, which reflects the magnificent pandemonium of life, past and present, in chaotic, colliding overlay.

A heightened focus on the grandiose fabrics and dress worn by the subjects is prominent in the work. Wood-Evans’ figures themselves are dichotomies, they appear in a state of fluidity and transformation. They are simultaneously both current and relevant whist beginning to slip away into a threatening obscurity. The artist has placed clues and suggestions in the works, leaving them open for interpretation. Ultimately, Legacy & Disorder offers a refuge amongst the sublime beauty and tranquility of the paintings, and the turmoil of a constantly shifting, fractured reality.

About the Artist
Jake Wood-Evans currently lives and works in Hastings, East Sussex. As well as exhibitions at international art fairs and private collections around the world, his work has been shown widespread across galleries in London and the UK. After well-received 2016 and 2017 solo exhibitions: Subjection & Discipline and Transitions, both with Unit London, Wood-Evans was debuted as a feature artist in his inaugural museum exhibition, REPORTRAIT at the Nottingham Castle Museum in 2018. His work can be found in private collections internationally, across New York,