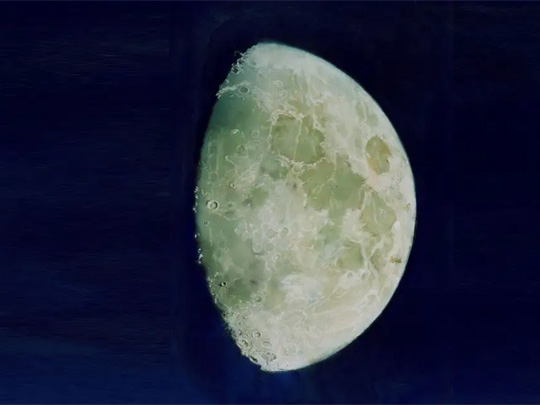 Featuring over 180 objects from national and international museums and private collections, the exhibition presents a cultural and scientific story of our relationship with the Moon over time and across civilisations. Through artefacts, artworks and interactive moments, the exhibition will enable visitors to reconnect with the wonders of the Moon and discover how it has captivated and inspired us.

The exhibition will explore how humans have used, understood and observed the Moon from Earth. Visitors will get the chance to relive the momentous events of the Space Race and the Moon landings before discovering the motivations behind 21st century lunar missions.

Significant objects on display include Apollo mission artefacts that travelled to the Moon, loaned from the Smithsonian National Air and Space Museum in Washington D.C. The “Snoopy Cap” Communications Carrier, worn by astronaut Edwin "Buzz" Aldrin during Apollo 11 will be exhibited alongside the Hasselblad camera equipment that captured some of the most recognisable and iconic images of the 20th century.

Lunar samples collected from NASA’s Apollo missions and the Soviet Union’s Luna programme, will be accompanied by a rare lunar meteorite from the Natural History Museum’s collection. This will give visitors to the NMM’s exhibition a unique opportunity to get close to such a diverse range of moon rocks and discover how researching these specimens continues to advance our understanding of the Moon.

Historical and contemporary artworks will illustrate how the Moon has long inspired artists, acting as a metaphor for the human condition. Moonlit scenes by J.M.W. Turner and John Constable will be displayed alongside contemporary pieces by Katie Paterson, El Anatsui, Chris Ofili and Leonid Tishkov. Artworks by Cristina De Middel, Aleksandra Mir and Larissa Sansour, will consider our relationship with the Moon through the lenses of gender and nationhood.

In the exhibition’s opening section, visitors will discover ways in which the Moon has been embedded in human culture, spiritually, practically and artistically, with its changing phases used to mark time in religion, navigation and medicine. The oldest object on display, a Mesopotamian Tablet from 172 BCE on loan from the British Museum shows how lunar eclipses were considered to be bad omens. Detailed Islamic and Chinese calendars highlight the continuing importance of using the Moon to set the date for key festivals such as Chinese New Year and Ramadan. Examples of historic medical texts, such as a 1708 pamphlet by the English Doctor Richard Mead show how the position of the Moon was once believed to influence our physical and mental health.

The exhibition will explore how new technologies, such as 17th century telescopes, 19th century cameras and remote equipment for space photography and mapping in the 20th century brought increasing understanding of the lunar surface and the Moon’s origins. A selection of maps, paintings, photographs, models and drawings from the 17th century to the present, will emphasise humanity’s continuing desire to understand more about the Moon. Examples include the earliest-known drawing of the lunar surface made from telescopic observations by British astronomer Thomas Harriot in 1609 and the detailed pastel drawings of the Moon by 18th century Royal Academician John Russell.

From classic science fiction through to the defining events of the Space Race, visitors will see how the Moon went from being a distant object of observation and place of imagination to a destination that was within human reach. The Moon looks at key moments within the Space Race, highlighting how a number of Soviet ‘firsts’ were ultimately overshadowed by Neil Armstrong’s century-defining ‘one small step’ in July 1969. Video artist Christian Stangl will show a new and exclusive version of his film ‘Lunar’, in which animated photographs from Apollo missions allow visitors to experience the Moon landings through the eyes of the astronauts. Apollo objects will sit alongside film posters, books, comics and magazines that celebrated and questioned these momentous events.

In 1969, the Apollo 11 astronauts left a plaque on the Moon claiming, ‘we came in peace for all mankind’. Today, there is renewed drive to return to the Moon, reflected in future projects from China, Europe, India, Israel, Japan, Russia and the United States. No longer the domain of superpowers, international space agencies, private companies and entrepreneurs are all part of this 21st century race for the Moon. Scientists, lawyers, artists and architects are considering the practical, psychological and ethical implications of human exploration and settlement on the Moon. The closing chapter of the exhibition will look at these contemporary motivations for Moon travel, leaving visitors to contemplate whether the Moon will become a theatre for exploitation and competition or remain a peaceful place for all humankind.