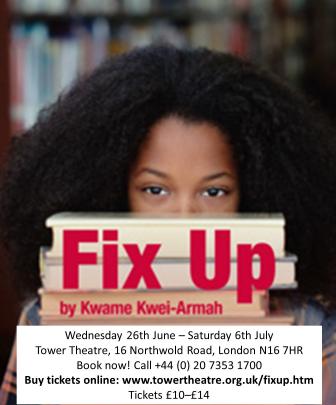 October 2004 and it's Black History Month, but no one's flocking to "Fix Up", Kiyi's bookshop in Tottenham where shelves are filled with the works of Marcus Garvey, James Baldwin, Claude McKay, Toni Morrison ... Property developers are poised to turn the bookshop into a black hair and beauty products shop and Kwesi's room upstairs, the HQ for black political activism, into luxury flats. In walks the mysterious Alice, the first person to buy a book in a long time, and life has officially become complicated for Kiyi and his friends. The revolution will not be televised ... but is anyone listening and does anyone care?

Fix Up is a brutally honest and witty exposé of a black society more interested in current pop culture fads rather than its unacknowledged past. In true August Wilson style, Kwame Kwei-Armah explores racial identity through the lens of a dynamic cast of characters, deeply flawed and trying to find their way.

This production features strong language and occasional use of racial epithets which some viewers may find offensive. Suitable for an age 12 plus audience.