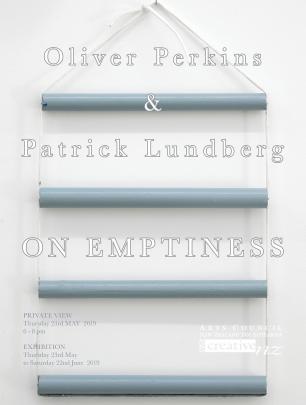 Nothingness is in reality a mirage, in a tripartite sense that it assumes the horizon of perception, represents a reverse image of the real, and is the expression of a desire at the heart of a reality that does not lend itself to it. It vanishes therefore when consciousness seeks to approach and thematise it.

1
The disappearance of the object does not only exclude but also reveals the presence of the world as the background against which all objects appear.

2
This exhibition seeks to develop a conversation between two series or rather two categories of work by artists Patrick Lundberg and Oliver Perkins. Lundberg’s ‘Sets’ and Perkins’ ‘string and dowel works‘. The affiliation between these bodies of work lies broadly in both artist’s co-habitation of a position in painting that seeks to circumvent representation and more precisely, in closely calibrated attempts, to invoke the world through perceptual experience.

Theirs is not a sceptical reduction of the painted object to its material conditions with the erroneous sense that it is therefore grounded, however infinitesimally, in ‘Reality’. Nor is theirs an attempt to establish transcendental ‘Truths’ through symbolic codification or structural modelling. Rather what they share in is the understanding of a painting as a kind of instrument for looking, or perhaps more ambitiously a receptacle through which the World appears to us negatively, as a swelling, pulsing, humming, untotalizable presence. As a silent constitutive element that for a moment becomes felt and which in music might be referred to as a third tone.

The means for achieving this, arrived at independently in both bodies of work, is to compose with emptiness. A paradigm in which the works operate with reduced material components in order to put emphasis very firmly on the structuring of negative space.