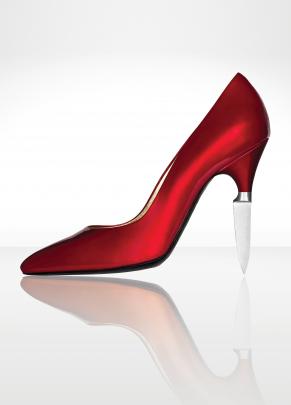 Hard Copy, is a 4 hander piece written for women, which will be performed for two performances at the Camden People’s Theatre, (58-60 Hampstead Road, Kings Cross, London NW1 2P) on Saturday 29th June at 8pm and Sunday 30th June at 2:30pm. It is the English language première of the original written by Isabelle Sorente, the well-known French novelist, playwright, critic and broadcaster, particularly on France Culture radio and translated by Martin Goodman, who became interested in the play whilst researching workplace bullying as represented in contemporary French storytelling (theatre, cinema and literature) for a PHD at the University of Leeds. The one-hour-long French original was published in France in 2001 and has already had successful productions in Paris, Brussels and Geneva. Best described as a black comedy, it focuses on four female office workers, and deals with themes of workplace bullying and how women entertain one another while doing routine jobs. It also examines women's preoccupations in a modern consumerist society dominated by men where being attractive and abreast of the latest fashion trends is vitally important. Despite an overtly comic introductory sequence, the plot takes a darker twist when three of the women decide to bully the fourth with fatal consequences. Director Jo Emery, who also takes a part of “Douce” in the play, said “ Hard Copy deals with themes of modern workplace bullying amongst women under pressure to conform, to be competitive and get ahead, which demonstrates in a darkly comic but still sinister way to what lengths some people will go, in order to ensure they get exactly what they want, creating a hierarchy in which success is all about manipulation, coercion and insinuation. Ultimately, it’s a funny but shocking, fundamental exposé of the ruthless female instinct to survive at any cost. The play will be performed by actresses from the Company of Ten which is the resident theatre group at the Abbey Theatre in St Albans, which presents ten productions a year, since the theatre was built in 1968. The theatre also welcomes professional tours in its two spaces, the Studio and the Main Stage. and regularly makes forays into both London Fringe theatre (Camden Fringe) and Brighton Fringe Festival with new writing from within the Company. The current patron is Mike Newell, the BAFTA-winning director of Four Weddings and a Funeral and Harry Potter and the Goblet of Fire.