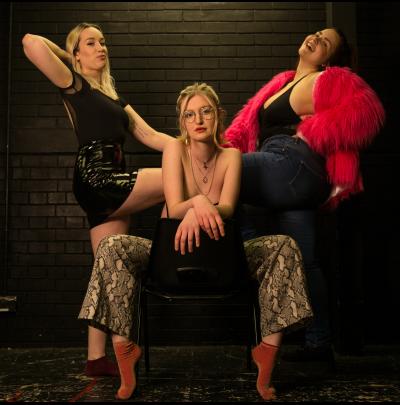 “But that only makes you more attractive.”
“But can we join in?”
“But you shouldn’t rule out a whole sector of the population."
“But how do you know?”
“But you haven’t tried with me.”
“But you don’t look gay.”
“But isn’t that a bit greedy.”
“But you just want everyone.”
“But I swear every woman is bi now.”
“But that’s really hot.”

Sir William Henry Wilcox, the government’s chief medical advisor in the late 1920s, declared lesbian sex “a danger to the wellbeing of a nation”. Despite this sexual acts between women have never been criminalised in the UK. The House of Lords themselves rejected the proposal in 1921 on the grounds that criminalisation of lesbianism would lead to its glamorisation, making it an even more attractive idea for young women. This seems like pretty clear cut evidence of male anxiety surrounding a female sexuality that they cannot partake in, are not wanted in, combined with the denial of female sexuality and an already latent fetisisation.

Three performers will explore their personal experiences in a gloriously grotesque alternative queer cabaret that will combine theatre, spoken word and music in obscene celebration.