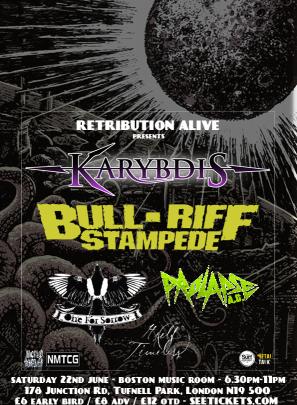 The band's name is shared with a sea monster from Greek mythology which was said to be a spawner of whirlpools who together with Scylla created a smashing gauntlet of death from which few seafarers escaped. (KA-RIB-DIS)

"One of the most promising bands to emerge from the UK metal scene in recent years, Karybdis have yet to receive the attention they deserve." - Dom lawson

Their debut album 'From the Depths' (produced by the legendary Russ Russell) embraced a Gothenburg-tinged sound, twinned by an unfaltering hardcore groove that elevated them to the upper echelons of the UK underground. Following a storming performance at UK Tech Fest 2013 the band began work on their sophomore release.

Produced by Death Metal producer extraordinaire, Mark Lewis at Audio Hammer Studios, 'Samsara' saw the addition of guitarist Matthew Lowry; pushing the band to new heights. After stellar reviews and a string of mosh-inducing live performances, the band were invited to play Bloodstock in 2016 and decimated a packed out Sophie Lancaster stage.

Unflinching in the face of the current trends, the band continued to forge their own path with their new album, 'In the Shadow of Paradise', released 02 Nov 2018. Produced by the up-and-coming Pavel Daniels of CoreTone Studios, the record sees the band delve further into their uncompromising brand of melodic death metal with increased aggression and technical focus.

From Bristol, Weymouth and Nottingham, a hybrid mix of old school influences, Bull-Riff Stampede has been described as 'a devastatingly heavy combination of Thrash and Death Metal'.

The debut album 'Scatter The Ground' was Tracked in late 2010, Mixed at various intervals through 2011 and was released in November of that year.

Following the debut album 'Scatter The Ground' the UK Thrashing Machine spent much of 2012 and 2013 taking to the venues with dates including billings with Sepultura, Onslaught, Sylosis, Evile, Grand Magus and Desecration.

2014 and 2015 were spent mainly on finishing writing and recording 'Enraging the Beast'. There were a few sporadic dates including the first dates across the water in Ireland and Northern Ireland as well as billings with Toxic Holocaust, Lawnmower Deth, Collapse, Xentrix, Evil Scarecrow, Savage Messiah and The More I See.

"A tight, compact, powerful unit who have honed their skills through endless gigging and good old fashioned hard work" - Powerplay