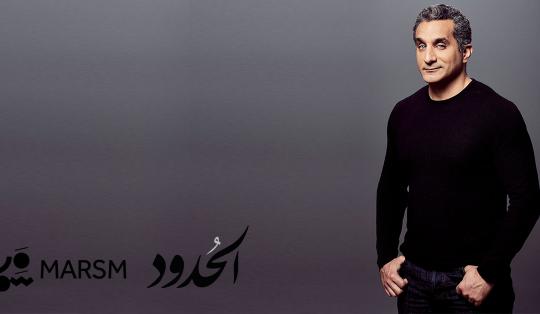 NOTE: This performance will take place completely IN ENGLISH.

This event is presented by AlHudood and supported by MARSM UK.

After a long career as a respected heart surgeon, Bassem Youssef has become one of the most influential and poignant satirists and political commentators from the Middle East. He shot to fame after treating the wounded during the Arab Spring in 2011, when his online comedy show went viral. Dubbed the Jon Stewart of the Arab world, his witty commentary and famous satirical news TV show El Bernameg has spread far beyond his home country of Egypt. Youssef hosted the digital series “The Democracy Handbook” for Fusion network, hosted the International Emmy Awards Gala of 2015, starred in the internationally renowned documentary “Tickling Giants” and appeared twice as a Senior Middle East Correspondent on the Daily Show with Jon Stewart.

A mixture of stand-up and story-telling, his debut London performance which takes the form of a one man show performed completely in English. Hear about his personal journey from being a heart surgeon, to a TV show host, to an accused traitor and spy, to a refugee who had to flee the Arab world only to arrive in the United States as Trump gets elected president. Heartfelt and funny, this unique show touches on media, propaganda, conspiracy theories and the plight of being an outsider in a new and suspicious society.

Following the event, we will be hosting a meet and greet reception with Bassem Youssef, including drinks and nibbles as well as a chance to speak to the man himself. For a chance to experience this unique opportunity, please purchase the Meet and Greet add-on ticket in addition to your general admission tickets.

***
Launched in 2013, AlHudood is an Onion-style newspaper using satirical commentary to comment on news in the Middle East. Run by a group of like-minded and light-hearted young creatives, its witty content mocks social habits, outdated traditions, political personae and religious clerics. The Guardian described Al Hudood as using “black humour to take aim at the region’s absurdities”.