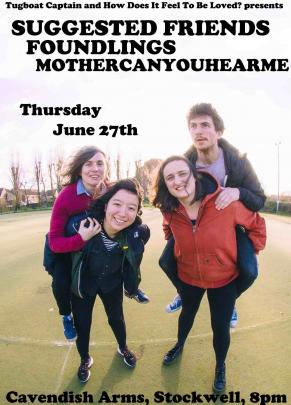 We're very pleased to announce that we'll be promoting a new series of regular gigs in London in partnership with our friends Tugboat Captain. The nights will be held on the last Thursday of most months at the Cavendish Arms in Stockwell. For our opening night, we're delighted to have these amazing bands playing:

A brand new four piece from London, Foundlings released their debut EP in March of this year on the Scottish label Last Night From Glasgow, and play dreamy fuzz pop songs that they say are "pitched between infectiously melancholic indie-pop and angular, post-punk inflected stomps". Our pick of the EP is the wonderful "Caught Up On You"!

A duo of best friends from London, Mothercanyouhearme employ a barrage of amps and effects pedals to create a gigantic noise that fuses the melancholic beauty of Alvvays with the distorted brilliance of garage rock.