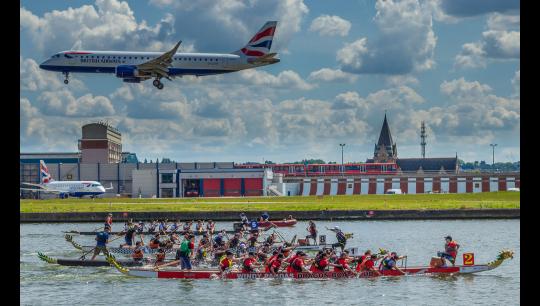 The 24th edition of the free, family-friendly, annual dragon boat racing event welcomes 10,000 visitors from all over the UK and overseas and provides an excellent opportunity to experience Chinese culture in the British capital.

Throughout the day, the spectacular action out on the water at the most prestigious event of its kind outside of Asia will be provided by more than 40 competing club, corporate and amateur teams taking part. Drama unfolds as novices do battle with some of the UK’s greatest paddlers, as well as the elements, to take home 5 cups, which are presented to the winning teams in a quayside awards ceremony on the cultural stage at 5.30pm.

On land, the event’s food festival will represent the culinary tastes of South East Asia with vendors representing each country, meanwhile entertainment including DJs and live music will be provided on the East West Festival stage (showcasing new artists from the East and West), together with martial arts displays and traditional Chinese lion dancing.

This year’s food festival will include Bite Mi, Newdlez Pad Thai, Pochi, Wok n Roll, EatFan, Enak Enak, Wheelcake, Yun as well as the wonderful Vietnamese Coffee of Ca Phe Vn and the ever-popular Pimms bar. Traditional Chinese lion dancing will proceed the ‘dotting of the eyes ceremony’ at 12-30pm with Priscilla To, Director General of the Hong Kong Economic & Trade Office to launch the event.

Appearing live on the East West Festival stage from midday onwards, presented by DJ Alice from Spectrum radio will be new and breaking musical talent.

There is also a raffle draw with fantastic prizes donated by sponsors Cathay Pacific and Hutong at The Shard.