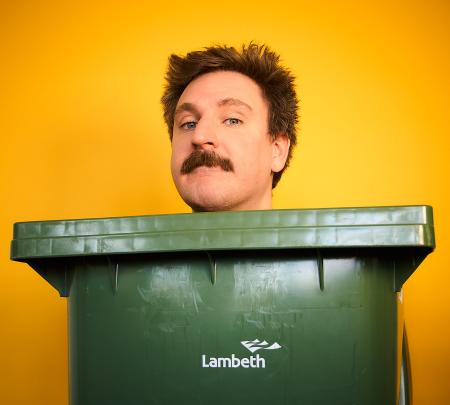 Ed promises to come up with a big idea to hang the whole thing on – but probably it'll be based on a loose set of unconnected themes with no real purpose. There'll be a demonstration of Ed's acting skills, the odd political impression and the apocalypse included in the standard package. An unsatisfying experience to both perform and watch. But then... all things must pass.
In 2008 Ed won the Malcolm Hardee Award.

Having spent time in a wheelie bin (for warmth, obviously), Ali's mind has been wandering and wondering. Brice has tried to throw a lot away – including himself. All he knows is he doesn’t want to be in a bin again. Ever. How's he coping with his second chance at life? 'I've made mistakes – all of them involved missing Ali Brice's shows' (A kingly tit). 'Joyously bonkers' **** (Chortle.co.uk). 'A hidden gem of an hour' **** (Skinny). 'Completely bizarre. Deadpan! Totally off-the-wall' **** (ThreeWeeks). 'A twinkle-eyed comedy natural' ***** (ShortCom.co.uk). 'Side-splittingly comical' ***** (TheUpcoming.co.uk).