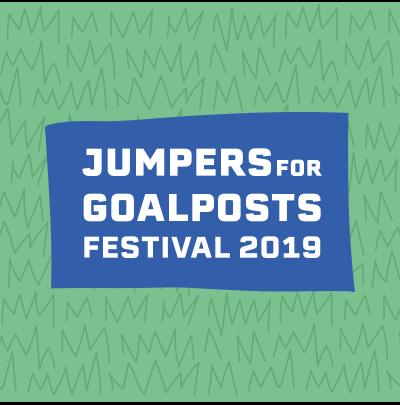 JUMPERS for Goalposts is a brand new, two-day festival coming to Printworks London, 3rd - 4th August, offering attendees a variety of unique, interactive experiences designed to highlight the power football culture has in bringing people together.

Supported by the London FA, Sporting Memories Foundation and Admiral Sportswear, the festival’s diverse schedule includes a panel discussion hosted by Sports Journalist and broadcaster Vaishali Bhardwaj on the making of “Herstory” in the wake of the 2019 Women’s World Cup. Vaishali will be joined by Lewes FC Centre Midfielder Shannon Moloney, CEO of Women in Football Jane Purdon and Debra Nelson who co-delivers the Football Beyond Borders Girls programme and featured as the voiceover for the England Women’s World Cup Nike campaign.

Daniel Geey, David Goldblatt, Michael Cox and Pete Lowe will look at the future of the game and how it might look in 2029, while Paul Kirton, Founder of Grassroots Football UK talks about the revival of grassroots football and the communities that are tirelessly working to overcome these challenges.

There will be other panels, Q&As, workshops, a marketplace, book signings, family activities, stall games, street food and a live screening of Liverpool vs Manchester City in the FA Community Shield. The broadcast will take place alongside a second screen showing a live performance by Minute Books, a design collective who will illustrate every minute of the game, before printing and binding into a book immediately after the match. Other screenings include, Bend it like Beckham, documentary State of Play and the story of Admiral’s rise, fall and revival,Get Shirty.

Workshop content features a session on alternative careers in for women in football, football zine-making using old culture photography and for children under 13, Alex Bellos and Spike Gerrell of children’s book series Football School, will be making school subjects fun through football.

On Sunday, the festival celebrates nostalgia with attendees encouraged to turn up in their retro shirts. A schedule full of themed content such as, Got Got Need: The wonderful world of football memorabilia and collectables, a live recording of theAlive and Kicking 90s Football Podcast and the Retro Football Shirt Podcast.There will also be retro video games and a vintage shirt exhibition.

Tying in with the Jumpers for Goalposts mission to show football as a force for good, the festival will host an exhibition of 20 one-off pieces of art made by well-known football creatives in response to, “My First Football Memory.” These will be auctioned off to raise funds and awareness for the festival charity partner, Sporting Memories Foundation.

Rahul Keerthi, Jumpers for Goalposts’ Founder and Producer says, “Jumpers for Goalposts is a celebration of football culture - yes, there's an invitation to learn and share but we also want to remind people to have fun with football again, whatever your age, background or interest in the game.

The name of the festival should evoke the joy, imagination and unlimited possibility that football makes many of us feel as kids, but we recognise that this has not been the case for everyone. Football culture can be a force for positive change, creating environments around football that encourage people to enjoy who they are and what they can do - both as individuals and as a team or community. Football is for all.”