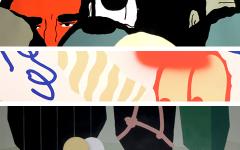 a conversation
“I struck up a convo with the person sitting next to me”
From down under on top, Gerrard, Fortrose and Routledge have struck up a correlating ‘convo’ between their work to create a show of unison but uniqueness.

Tom Gerrard:
Tom Gerrard’s art career started in the mid-90s where his art could be found on the streets of Melbourne. These days, he’s globally known for painting simplified characters, architecture and nature using a minimal colour palette. The characters and elements that make up his paintings have been inspired by people he’s seen and places he’s been.

Matthew Fortrose:
Abrupt and immediate ideas around composition and structure hold the attention in Matthew’s mural, studio and installation work. Drawing influence from colour field painting and early Bauhaus graphics, the use of rudimentary tools and industrialized processes assist in constructing a narrative that balances premeditated and inadvertent.

Elliot Routeledge:
Based in Sydney, Elliot’s work exists in a balance between expressive mark making, abstract form and often word based art. Having spent a lot of time practising and studying colour, his current work is reflective of how he takes this research of colour relationships and pattern choices, and treats them in a way to create bold, colourful and harmonious compisitions.