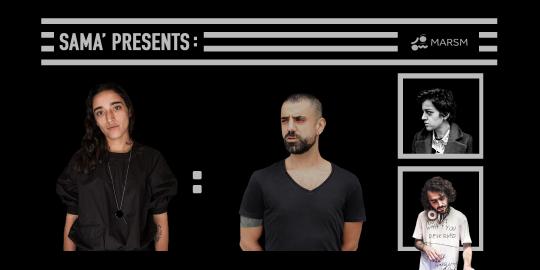 Returning to the capital after her summer debut, renowned DJ and techno instigator SAMA’ has teamed up with Marsm to curate a late-night takeover at Electowerkz. For this event, SAMA’ will be featuring and playing with her top picks from the Middle Eastern and international electronic music scenes.

Sama’ (aka. Skywalker) is the DJ and electronic music producer from Palestine playing techno, house, and other deeper sub-genres with a unique twist of her own. Her Boiler Room debut in 2018 has racked up over 1.5MIL views as she continues to solidify her imprint on the European and Middle Eastern electronic music scene.

In Sama’s own words, “There’s only one man in my life who never disappoints me, and I believe he’s done better than most big names: Jason Kaakoush” (Mixmag Turkey). His unique global sound and unparalleled selection has led to him being Sama’s favourite DJ. Jason is currently cementing his name in the global scene by releasing chart topping music including his latest release on Moan Recordings.

Budding DJ Anahita Shamsaei, grew out of Tehran’s underground electronic scene and fine tuned her sound across the UK, Turkey and Germany. In a special guest appearance, the unstoppable self-taught techno aficionado will be joining her transcontinental peers for a bass-heavy selection.

Born in the UK and raised in Beirut, William Mahfoud (a.k.a. Rise 1969) is considered a staple in the Lebanese rave scene, drawing influences from the punk, techno, drum and bass, ambient and experimental communities. After winning this year’s Beirut Berlin Express competition organised by The Grand Factory, he’ll be spending the summer at the BlackHead Studios in Berlin under the mentorship of Moodmusic Records boss Sasse.