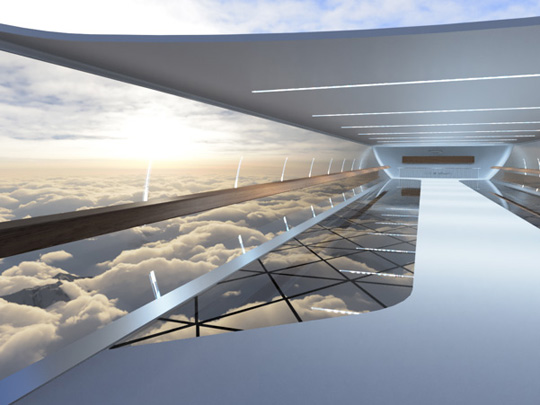 As an island nation, the Brits have long been open and curious about the world. It is that pioneering and creative spirit that led British Airways' predecessor Air Transport and Travel (AT&T) to make the world's first scheduled international flight from Hounslow Heath to Paris on 25 August 1919 in a single-engine De Havilland DH4A.

Since then, the airline hasn't looked back, pioneering longer courses in bigger flying machines to bring Britain to the world and the world to Britain and moving from just one flight to France to more than 800 flights a day to 200 destinations around the globe.

Through in-depth research, and in partnership with the Royal College of Art and world-leading virtual realists, British Airways presents BA 2119: Flight of the Future. An exhibition at Saatchi Gallery which seeks to push the boundaries of imagination and explore how future generations will circumnavigate the globe in a world of advanced jet propulsion, hyper personalisation, automation, AI, modular transport, sustainability, health and entertainment. We hope you enjoy it.

Immerse yourself in the evolution of flight through a first-of-its-kind interactive, multi-sensory virtual reality experience that traces humankind's relationship with flight.

Built by multiple award-winning VR creators and an Oscar-winning practical effects team, Fly turns you into a time-travelling pilot, from the earliest imaginings of Leonard da Vinci and his ornithopter, to the Wright Brothers' first successful attempt at Kitty Beach, to British Airways' predecessor, Air Transport and Travel's inaugural flight to Paris. Travel on Concorde before jumping to today's A350 and onwards to a possible vision of the future of aviation.