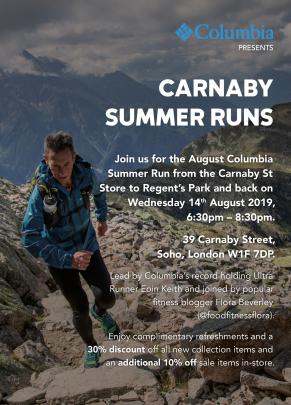 Columbia presents the Carnaby Street Summer Runs. Join a 6k run from the Columbia Carnaby St Store to Regent's Park and back on August 14th.

Join a 6k run from the Columbia Carnaby Street Store to Regent's Park and back on Wednesday August 14th. 6:30pm-8:30pm.

Leading the run is Columbia ambassador and world-class ultra runner Eoin Keith. Eoin will also take part in a Q&A, so get your questions at the ready. Joining Eoin is the inspirational fitness blogger Flora Beverley, perhaps better known by her social media handle @foodfitnessflora.

Open to the general public, this fun and inclusive event welcomes seasoned runners and beginners alike (18+), so sign up today and start your summer on the right foot.

Columbia is pleased to offer a 30% discount off all new collection items and an additional 10% off sale items to all attendees to be redeemed on the day in the Carnaby Street store.

About Eoin Keith:
Columbia ambassador Eoin Keith is a renowned figure in the world of ultra running and unquestionably one of the best Irish ultra runners. He holds the Irish records for 24hr track running, 48hr road running & 6-day running. Eoin’s best international race results include finishing 5th at the 24-hour world championships in Bergamo in 2009, finishing as 2nd place veteran in the 2013 UTMB and 2nd in the 6-day World Trophy race in Hungary in 2015. In 2016 Eoin won the Spine Race - one of the hardest Ultra races in Britain - with a new course record of 95 hours, 15 hours faster than the outgoing record. Eoin also participates in Adventure Races on the domestic Irish scene and internationally.