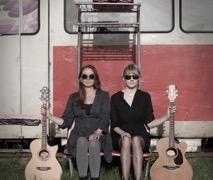 The Lasses, who hail from The Netherlands, have been performing in folk clubs and on festival stages since 2012, but they are still relatively unknown in the wider folk world. Their new album 'Undone' might just change that. Featuring thirteen songs about losing one's composure and trying to regain it, 'Undone' revolves around Sophie and Margot's strong harmonies, recorded primarily with just one microphone. The first single of ‘Undone’ will be released on August 1st and their tour starts in early September with a number of shows in the UK: on Sept 8th at The Musician in Leicester, on Sept 9th at The Slaughtered Lamb on London.

Even before they ever spoke to each other they sang together, at a session in Irish pub Mulligans in Amsterdam. Now Sophie Janna and Margot Merah tour all around the world with their reinvigorating repertoire of Scottish, Irish and American folk and intimate self-penned songs. Their strong harmonies, unaffected vocals and choice of songs ensures they are asked back wherever they play. The past years saw them tour the Netherlands, Belgium, Germany, Scotland, England, the United States, Canada and Japan. The Lasses love to sing in churches, living rooms and intimate folk clubs, but their charm makes their performance work just as well on a large festival stage. Accompanying themselves on bodhrán, tenor ukelele and guitar, the unique blend of the women’s voices always takes the center stage.

When they are not on tour, The Lasses still go to the session at the Irish pub at which they first met: Mulligans in Amsterdam, where their favourite session takes place every Wednesday night in the backroom.
Review of the lead track “The Tide” from The Lasses new album “Undone.
Their harmonies are exceptional, and along with the simple guitar accompaniment and plaintive French Horn, ‘The Tide’ is both striking and unforgettable” Alex Gallagher, Folk Radio.