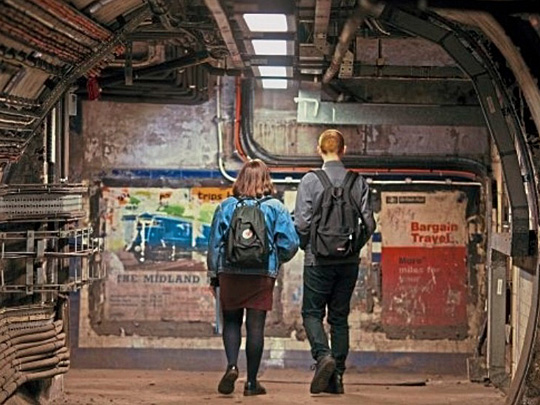 Visit an 'abandoned' Tube station underworld and discover what secrets lurk beneath our busy streets in our new Hidden London exhibition, opening this October.

Hidden London: the Exhibition will take you on an immersive journey of some of London’s most secret spaces in the oldest subterranean railway in the world. These ‘forgotten’ parts of the Tube network have incredible stories to tell about Britain’s wartime past - such as the Plessey aircraft underground factory which had 2,000 members of staff, mostly women, working in the two 2.5 mile-long tunnels on the eastern section of the Central line during the Second World War.

You'll be able to enjoy - some for the very first time - the largest number of rare archive photos, objects, vintage posters, secret diagrams and decorative tiles from disused stations that have been brought together in one location.

Discover stories about how Churchill took shelter at the height of the Blitz in the Railway Executive Committee’s bomb-proof headquarters deep underground at Down Street station. You'll be able to see what sheltering was like for Churchill in a recreation of the secret dining room where he was served the best caviar, champagne, brandy and cigars, courtesy of the railway hotels.

You can also explore other iconic locations which we're recreating in our Global Gallery, including the historic abandoned ticket hall at Aldwych station with an original 1930s ticket booth, and its famous Leslie Green tiles.

Hidden London is London Transport Museum’s exclusive programme of tours and events at disused stations and secret sites across London. Led by experienced guides, ready to share unusual and little-known stories surrounding the stations’ varied histories, these visits offer an exciting opportunity to explore locations rarely seen by the public.

Visitors will go behind secret doors, to passageways and lift shafts closed to the public since 1929 and discover the original Edwardian design features, the fascinating stories of wartime sheltering and top-secret storage of priceless artefacts. Piccadilly Circus offers a unique perspective of how the London Underground has grown and adjusted to Londoners’ needs for over a century.

Down Street
Located in Mayfair between Hyde Park Corner and Green Park stations, Down Street had a short life as a working station from 1907 to 1932 but became critical to winning the Second World War when covertly transformed into the Railway Executive Committee's bomb-proof headquarters.

Experience the warren of narrow tunnels where the nation's railways were coordinated, and where Prime Minister Winston Churchill secretly took refuge at the height of the Blitz.

Aldwych
Aldwych station is one of London’s secret places, holding myths and memories of times gone by. Opened to the public in 1907, it was never as heavily used as originally intended and closed nearly 100 years later in 1994.

The station has had a varied history; from providing shelter to Londoners during the Blitz, to being used for film and TV shoots including The ABC Murders (2018), Darkest Hour (2017), Sherlock (2014), and Atonement (2007).

Join our tour and see the one of the former termini of the Piccadilly line– the ticket hall, the original lifts, abandoned platforms and tunnels, and inter-connecting walkways – including some that are very rarely seen by the public.