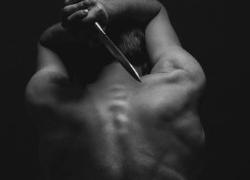 It's a man's world... but not with this Juliet around! Straight from its world premiere 5 star run at the Edinburgh Fringe, this is a fresh, footballing take on Shakespeare's classic tragedy of passion, hate and vendettas where true love is no protection... A hit new modern twist on Shakespeare’s classic. Directed by Nick Hennegan (Hamlet – Horatio’s Tale, Henry V – Lion of England and Guy Masterson’s A Christmas Carol) and featuring a stunning original score by Robbie Williams (A Christmas Carol), the voice of a famous surprise guest, and a brilliantly talented cast of four bright young actors, 'Romeo and Juliet' and its twinned new-writing rep show 'Pals hit London' for the first time at the Tabard Theatre this September.

‘This is a masterclass on how to do Shakespeare... breathtakingly inspiring’ ... ‘razor sharp direction... the cast is flawless’... ‘The wordless love scene is one of the most powerful i’ve ever seen’ - British Theatre Guide
‘Moments of brilliance’ - Broadway Baby