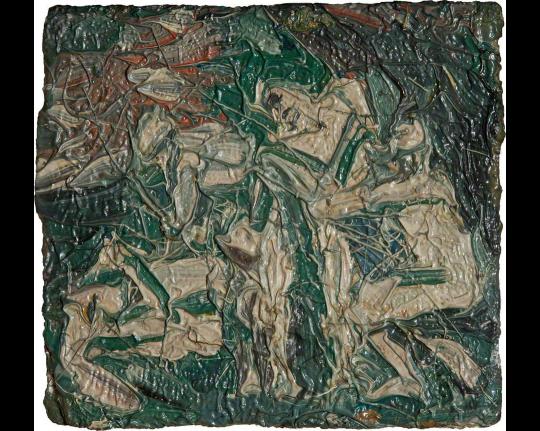 BURU (the Ben Uri Research Unit for the study of the Jewish and immigrant contribution to the visual arts in Britain since 1900) is proud to present ?Looking and Experiencing:? ?A Tribute to Leon Kossoff,? marking the artist’s sad recent passing and paying tribute to his considerable achievements as one of Britain’s finest post-war figurative painters.

Born in Islington to first generation Russian-Jewish immigrant parents, Leon Kossoff was raised in London’s East End, where his parents ran a bakery. A seminal encounter, aged nine, at London’s National Gallery with Rembrandt’s ?Woman Bathing in a Stream? (1634), set him upon his future path as a painter. His training at St Martin’s School of Art (1943–45), interrupted by his military service with the Royal Fusiliers (2n? d? Battalion Jewish Brigade) during the Second World War, recommenced in 1949, and together with friend and fellow pupil Frank Auerbach, he also studied at the Royal College of Art (1953–56). Both were also inspired by the freedom offered by David Bomberg’s evening classes at Borough Polytechnic (1950–52). Kossoff participated in six group exhibitions at Helen Lessore’s Beaux-Arts Gallery (1956–64) and held his first solo exhibition at the Whitechapel Art Gallery in 1972. In 1976, he was named by R. B. Kitaj in the Hayward Gallery exhibition, ?The Human Clay? – alongside Michael Andrews, Frank Auerbach, Francis Bacon, Lucian Freud and Kitaj himself – as one of the ‘School of London’ painters (although this controversial term was never adopted by the other so-called ‘members’). Kossoff’s international reputation was established by the 1981 exhibition ?Eight Figurative Painters (? Yale Center for British Art, New Haven, CT) and he represented Great Britain at the 1995 Venice Biennale. A major retrospective at Tate (1996), has been followed by innumerable exhibitions since including, most recently, Leon Kossoff: A London Life? (Piano Nobile, 2019).

Looking and Experiencing:? ?A Tribute to Leon Kossoff? features paintings, drawings and etchings representing the artist’s major themes and motifs spanning his long career, including portraiture (particularly of his family and close circle), the urban – particularly the railway – landscape of London, responses to the old masters, and the nude. Works have been drawn from both public collections including the Schlee Collection, Southampton; and Swindon Museum and Art Gallery, as well as Ben Uri’s own collection, and selected important private collections. Highlights include an early oil painting, ?Railway Bridge, Mornington Crescent (?c.? 1953, Private Collection), and ?Nude on a Bed? (not dated, Schlee Collection, Southampton), and two iterations of the Booking Hall, Kilburn Underground (1975, Swindon Museum & Art Gallery; and private collection).? K?ossoff’s enduring engagement with the old masters, in general, and his many responses to Poussin, in particular, is represented by his Study for Copy of 'Cephalus and Aurora' by Poussin No. 2? (1976, Swindon Museum & Art Gallery) after Poussin’s ?Cephalus and Aurora? (?c.? 1603, National Gallery), of which Kossoff commented: ‘It seemed as though I was experiencing the work for the first time. I suppose there is a difference between looking and experiencing. Paintings of this quality, in which the subject is endlessly glowing with luminosity, can, in an unexpected moment, surprise the viewer, revealing unexplored areas of self.’*

Further works by selected members of the so-called ‘School of London’ group include Frank Auerbach’s lithographic portrait of Kossoff, Lucian Freud’s etching of Lord Goodman and R. B. Kitaj’s ?Self-portrait with Cap,? which form part of a small, additional support display of works by artists whom Kossoff admired, also including prints by Rembrandt and Du?rer who both served as considerable influences on h