Pick Of The Fringe - Josh Berry 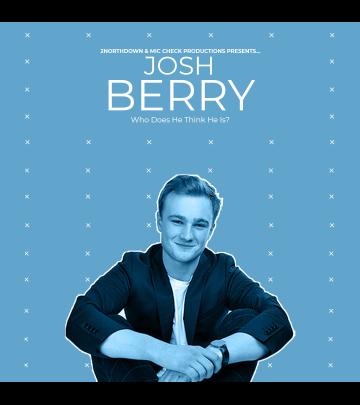 Mic Check Productions heads to London’s favourite intimate comedy venue 2Northdown in King’s Cross, to present 9 days full of their top picks of the Edinburgh Fringe Festival 2019. After last year’s success of 2Northdown’s sell out Pick of The Fringe Season, this year, the team are looking forward to making 2019 bigger and better!


Josh Berry: Who Does He Think He Is
Director’s Choice for IYAF Comedy Award 2019

The ‘Prodigiously talented impressionist’, Josh Berry returns to the Edinburgh Fringe with: Josh Berry: Who Does He Think He Is?

The social media sensation has appeared on BBC1’s Michael McIntyre’s Big Show and The Tracey Ullman show, is a regular on Radio 4 (featured on Dead Ringers, The Today Show and Newsjack) and has clocked up millions of views online with his ‘James Acaster Making Pasta’ sketch.


‘Josh Berry: Who Does He Think He Is?’, sees the 23-year-old slice through British Culture with whimsical vocal parody and biting satire in equal measure. From Russell Brand, to Louis Theroux, Jacob Rees Mogg to Middle-Class mothers, few escape his withering gaze.


“I laughed at this a lot” James Acaster


“Berry’s impressions are second to none. His James Acaster impression – considered so accurate that Acaster himself commented on its hilarity – is truly wonderful, and starts the show off on a strong note.” The Wee Review