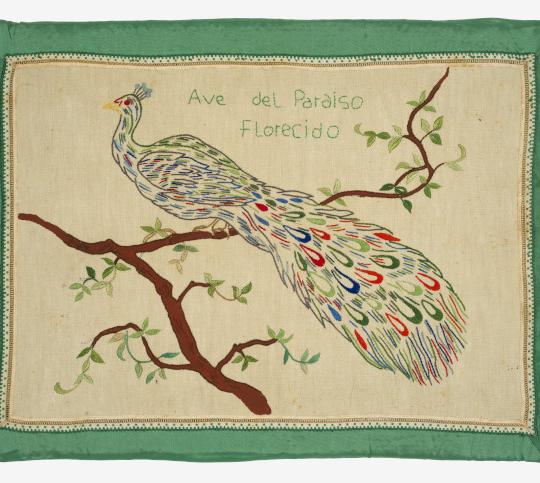 Cecilia Brunson Projects is pleased to announce I am Awake, the first London exhibition of the celebrated Paraguayan artist Feliciano Centurión.

Centurión, who died aged 34 in 1996 from the complications of AIDS, was a central figure of the ‘Arte Light’ movement of the late 80s, linked to the Ricardo Rojas Cultural Center in Buenos Aires. These artists were known for their flamboyant, irreverent works that embodied progressive attitudes to sexuality and lifestyle, emerging in tandem with the fall of right-wing dictatorships across Latin America.

I am Awake is comprised of a series of works from the artist’s estate, some of which are being shown publicly for the first time since his death. Taken mostly from the period of his life following his diagnosis with HIV in 1992, the exhibition consists of characteristic embroidered frazadas (blankets), along with plastic dinosaurs bedecked with crochet outfits, painted paper plates and the documentary film directed by Mon Ross, ‘Feliciano Centurión: Abrazo Íntimo al Natural’.

The artist’s work signals a moment in Latin American consciousness, where a new generation of late ‘80s artists – influenced by postmodernism – eschewed big-idea utopianism in favour of a more layered, subjective and wry perspective. These artists embraced the peripheral and traditional as well as the popular and mass-produced. From a small-town childhood absorbing the cultural melange of Guaraní Indians and Spanish Jesuits and raised by a mother and grandmother who taught him the traditionally female activity of lacemaking, embroidery and crochet, Centurión became a shining light in this new cross-cultural consciousness.

In many of the works of this period, Centurion intervenes the most intimate household textiles – blankets, pillowcases and pillows – typically mass-produced and cheap. On these he sews beautifully intricate pieces of embroidery, Paraguayan Ñandutí lace, patches and backgrounds of bright fabrics. These form habitats in which the artist brings to life a pantheon of semi-mythical symbols or beings, which derive from his own night-time dreams.

Subjects also include animals, such as the Jaguar, that occupy the Paraguayan Chaco, conjuring up a mixture of nostalgia for his homeland alongside the tactile sensuality of everyday bedtime items.As the critic Ticio Escobar has said, this intention towards beauty is linked to the Guaraní Indian ideal of tekoporã, the search for the beautiful life in both communal and private life.

According to confidantes such as fellow artist Ana López, his diagnosis came with an overwhelming sense of vertigo – the feeling that a virus was tugging at his whole consciousness, not just his health. These feelings are woven into his pieces. Works that followed become increasingly intimate, small pictorial elegies – stars, suns, on pillows, handkerchiefs and scraps of blankets. To help him process his fear day-to-day, phrases and mantras appear in Centurion’s embroidery: from Liliana Maresca’s ‘El amor es el perfume de la flor’ (Love is the fragrance of a flower) to the darker fragment of an Alina Tortosa poem, ‘La muerte es parte intermitente de mis días’ (Death is a recurring part of my life). He shows us that the beautiful life can exist in darkness as well as light, and this is the legacy of Centurión’s work.

Says Gallery Founder and Director, Cecilia Brunson: ‘Highly codified and drawing on the art forms of his native Paraguay, Feliciano Centurión’s work exudes spirit, bravery and light, and its aesthetic power is further enhanced when contextualised with the oppressive regimes he was compelled to live and work under and quietly against throughout his life. The gallery is delighted and honoured to present this landmark show, and in doing so to pay tribute to Centurión and satisfy the growing interest in his work both in Latin America — he was one of twelve individual