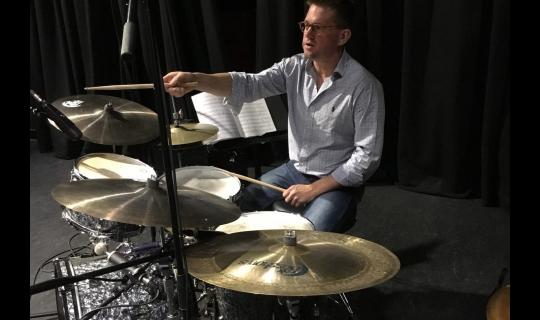 Often touring, recording and appearing on televised concerts, this group helped to ensure that the West Coast jazz scene retained a strong post-bop identity strongly linked to the East Coast quintets of yore led by Parker and Gillespie in Shelly's hometown of New York.

A truly original musician and drummer, Shelly Manne's mastery of his craft are immediately recognisable.

In bringing together this new group, Skelton's objective is to share the legacy of these remarkable live recordings with fresh energy; each of the players here are chosen not for the purpose of emulation but to express their own identities as informed by the original recordings.

Matt Skelton has long been known as one of the foremost drummers on the UK jazz scene, having accompanied many leading internationally known figures such as Harry ''Sweets'' Edison, Conte Candoli, Bucky Pizzarelli, John Pizzarelli, Warren Vache and Scott Hamilton.

Most recently he has appeared with Steve Grossman, John Hendricks, Curtis Stigers and with Kurt Elling as part of Guy Barker's latest large scale commission for the BBC.