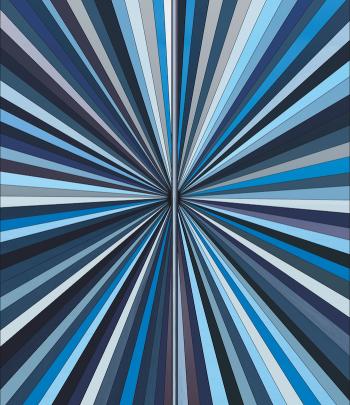 BLUE ambassador Andrea Hamilton has joined forces with the Blue Marine Foundation (BLUE), the charity dedicated to creating marine reserves and establishing sustainable models of fishing, to present a new exhibition featuring 36 lauded artists and their responses to that most previous and fundamental elements: water.

Curated by Nico Kos Earle, the thought-provoking and intuitive works in the show offer a range of media, from bronze sculptures and oil paintings to cyanotypes, photograms and LED light-based works, reflecting an ongoing connection to, and observation of, the ocean. Many of the artists live in coastal towns and create works in response to climate change and over fishing.

Artists include Chris Levine, whose lenticular of The Queen remains one of the most iconic portraits of royalty. Specially for the show, Levine has created a uniquely coloured ‘Blipvert’ which can only be seen with peripheral vision. Celebrated sculptor Hamish Mackie’s monumental ammonite remind us that the sea has been with us – and vital for survival – since Jurassic times. Internationally-acclaimed Belgian sculptor Koen Vanmechelen’s work explores the interplay between art, science and philosophy, while Deborah Tarr’s sumptuous abstracts have the same meditative power as a wild, rolling sea. Meanwhile Nancy Cadogan, fresh from a sell-out show at the Saatchi Gallery, examines
the power of the sea inside our minds. Proceeds from the show will be split equally between artists and BLUE.

Andrea Hamilton has been observing the ocean in its many moods for more than 20 years, from the Water Works series (2014) to her new pieces which take inspiration from an extraordinary, expansive catalogue of seascapes: water and sky observed and shot in natural light. At the heart of this oeuvre is a completely new colour system: A Nomenclature of Seachroma, the first-ever library of natural sea colour, created entirely from raw, non-Photoshopped digital files. Hamilton has sought to capture the maximum chromatic variation in one place, rigorously documenting the tonal changes of air, water and light, and capturing moments of transcendence: colours that resonate with the human soul. In Horizon Bursts, Hamilton plays with the natural horizon line as a point of visual and mental focus, pulling us into a nexus of energy

The exhibition is aimed at supporting the high seas, the vast area of the ocean which is beyond national jurisdiction and considered by the UN to be ‘the common heritage of mankind’. Clare Brook,
BLUE CEO, says: “The high seas play a vital role in absorbing the heat from man-made climate change and in providing the oxygen we need to breathe. But a healthy and climate-resilient ocean is one filled with natural life. Protecting the biodiversity of these vast areas is therefore vital for the future of humanity. Yet it is being ravaged by industrial-scale fishing and deep-sea mining, including at the Mid-Atlantic Ridge’s field of underwater chimneys that scientists believe is where life on Earth began.”

“Scientists, like artists, have a deep and often intuitive understanding of the natural world that comes from close and continued observation. What makes this show so exciting is not only how many insights are shared, despite the different approaches to subject matter, but that both inspire a greater love for our oceans. Together, they remind us that when you love something, your instinct is to protect it.”

On 6 November, BLUE will host a THINK-IN, chaired by BLUE CEO Clare Brook and featuring BLUE’s Chief Scientific Adviser Professor Callum Roberts and Head of Policy Adrian Gahan, plus Andrea Hamilton, Angela Palmer and Simon Allison. The group will discuss the wonders of the high seas and BLUE’s work on securing a UN treaty to secure protection of these huge and wonderful areas.