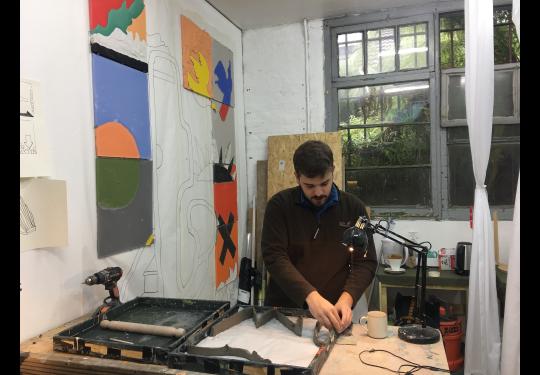 Emerging artist Hugo Brazão presents a new immersive installation at the Embassy of Brazil in November exploring themes of misdirection and disorientation.

From largescale tapestries to structures made of plaster, Brazão’s vibrant installation takes viewers on a journey through constructed spaces that have neither beginning nor end. Foregrounding light, colour and shape, the artist invites viewers into textured and imaginative realms.

The installation responds to the architectural features of the exhibition space itself, the Embassy of Brazil’s impressive Sala Brasil gallery. The remarkable grade II listed room, once the P&O ticketing office where it is said tickets for the Titanic were sold, has long been symbolic of voyages into the unknown. Closely studying the space, Brazão incorporates existing decorative and architectural elements, such as seagulls and seashells, into a distinctly new and contemporary experience. For example, a soft structure placed on the floor as to appear like water mirrors the ceiling decorations above, creating the illusion of a natural reflection.

Central to the exhibition is a consideration on forms of escapism and detachment. Moving through space and time, the installation investigates ancient forms of refuge as well as contemporary urges to return to simpler ways of living. In a present-day context increasingly sceptical of the concept of truth, Brazão creates compelling narratives that blur the boundaries between myth and reality.

A renewed interest in the symbolism of folk and craft culture testifies to a recuperation of the local and tactile in an increasingly digital and virtual world, themes central to Brazão’s work. Embracing artisanal labour, the artist inserts himself in the recent resurgence of textile art - from London Frieze’s new themed section Woven to Met Breuer’s striking 2019 exhibition on the fabric sculptures of Indian artist Mrinalini Mukherjee in New York.

As a melting pot of histories and traditions, including those of its South American neighbours and Brazão’s native Portugal, Brazilian folklore provides a fertile ground for artistic inspiration and deeper reflections on the value of cultural preservation and exchange. In part, the installation draws on the mythological Curupira, protector of the forests. Curupira’s feet are turned backwards making tracks that confuse hunters and travellers.

As the winner of the VIA Arts Prize 2018, Brazão presents his solo show alongside this year’s final 30 exhibition, which showcases artworks inspired by Ibero-American arts and cultures. His winning tapestry explored cultural boundaries and bridges in his hometown of Madeira using bold colours and detailed craftsmanship, demonstrating his interest in modernising marginalised traditions.

As a multimedia artist with a diverse practice ranging across painting, sculpture and textile, Brazão selects materials in relation to the space and context of each project. His methodology foregrounds personal and historical research as well as an interest in psychology in order to create narratives that blend fact and fiction and reveal both old and new truths. By reimagining material found through research, he encourages new associations and materialises a vibrant network of popular, cultural and historical referents. Materiality itself is integral to his oeuvre; whether painted tree barks, elaborate stone and string constructions, or large multi-coloured tapestries, his work reflects the ways objects, bodies, histories and ideas occupy and fabricate space.

The artist is working with London based curator Luís Manuel Araújo.

Chair of ACALASP (the Association of Cultural Attachés of Latin America, Spain and Portugal), Creative Producer and Ad Honorem Cultural Attaché at the Embassy of Guatemala in London Cecilia Santamarina de Orive says,

“As the winner of the 2018 VIA Arts Prize, Hugo Brazão exhibited