Richard Herring: Me 1 vs Me 2 Snooker 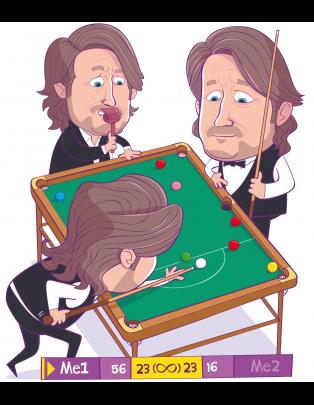 A childhood playing himself at snooker

Produced by Avalon
Presented by The Cockpit

The Podfather, Richard Herring, presents perhaps his most esoteric podcast in which he recreates his lonely childhood by playing himself at snooker; whilst commentating and refereeing inexpertly. In this special filmed exhibition match Me1, the happily married family Richard Herring, will take on Me2, the single, lonely maverick Richard Herring in the best of three frames, to find out who will win the Chris Evans (not that one) Trophy. This is surely the sporting event of 2019 if not the 21st Century. Do not accept any substitutes or go to see the bastardised 2 person version of this sport. The only true competition comes when the two players are equally matched, because they are the same (not particularly competent) person.
A rare chance to see the world’s longest-running snooker-based podcast LIVE and cheer on your preferred Me!

“"Wonderfully oddball, regularly hilarious series” Telegraph
“ Listeners will either have to giggle away at the ridiculous concept, or become deeply irritated.” Time Out
“A secret triumph. More than a middle-aged man playing snooker against themselves in a basement, it is a hero, fighting against a tide of mediocrity and repetition, struggling to create a brave, new and original vision.” Freakin’ Awesome Network
“Representative of the diversity of podcasting” Huffington Post.