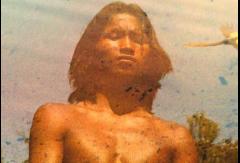 To celebrate a decade showcasing Portuguese spoken film in the UK, Utopia is delighted to bring this autumn Julião Sarmento, Solveig Nordlund, Pedro Neves and Ricardo Vieira Lisboa to discuss their work.

The season opens with Un Certain Regard Jury Prize winner at 2018 Cannes Film Festival, The Dead and the Others, which takes us on a journey through the Amazon rainforest and its indigenous' traditions. Audiovisual essays will be in the spotlight with two exclusive sessions followed by thought-provoking talks. The environment will take centre stage with a tale of displacement and urban sustainability in Tarrafal.

The festival will turn to two days on the topic of censorship in Portuguese contemporary image filled with presentations, films and debates with international specialists, wrapped up with a screening of Julião Sarmento’s groundbreaking films, rounded off by a conversation with the artist.

The festival reaches the highlands this time. Solveig Nordlund’s sci-fi films Low-Flying Aircraft and Journey to Orion, both based on works by J.G Ballard to be screened at the great Summerhall, in Edinburgh.

There’s little time to celebrate the milestone of reaching a decade, as we continue our journey showcase the best and most compelling in Portuguese film and audiovisual production, and attempt to steer the debate around Portuguese-spoken cinema in the UK.