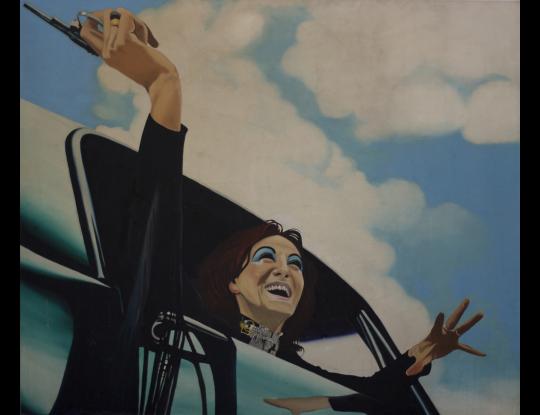 The Redfern Gallery is delighted to present THEM, an exhibition examining the work of five artists who came to prominence in the early 1970s, including Duggie Fields, Andrew Logan and Derek Jarman. Curated by James Birch, the show’s title derives from an article of the same name written by the cultural historian Peter York for Harpers & Queen that appeared in October 1976. With great acuity, it sought to unravel an aesthetic sensibility apparent in young Londoners of the time.

To be ‘Them’, York wrote, was to be part of ‘a mysterious aesthetic conspiracy’ prepared to sacrifice almost anything to ‘look interesting rather than sexy’. This ‘look’ was a highly refined form of camp and came at a time when, according to York, ‘marketing of all sorts of things sold to non-queer people.’

York cited many things that weren’t Them, but also those who personified it. These included the singer and songwriter Bryan Ferry and the fashion designer Zandra Rhodes, while the David Bowie film, The Man Who Fell to Earth (1976), which he considered a Them movie and Andrew Logan’s Alternative Miss World contest as the ultimate Them event.

The date of its publication is significant, because one month later on 26 November, The Sex Pistols released Anarchy in the U.K., an event that effectively swept away the concept of Them.

This exhibition, which brings together more than twenty works dating from the late 1960s to the 1980s, including paintings, sculptures and collage, examines the aesthetics behind the concept of THEM through the prism of art. While some of the five featured artists were named in York’s article— Andrew Logan and Duggie Fields are labelled as ‘The Gang’ —this was not a movement in any sense, but a sensibility around which they all loosely confederated.

It is perhaps in Kevin Whitney’s Chelita Secunda (1969/70), a monumental portrait of the late journalist and fashion stylist Chelita Secunda, that this spirit is most evident. The work, rendered in oil, depicts Secunda spilling out of the window of a sports car, her arms flailing as she clasps a small revolver. Dangerous and carefree, the smudge of glitter under her eyes alludes, perhaps, to her role kickstarting the glam rock revolution of the early 1970s.

Created a year after he graduated from Chelsea School of Art, Duggie Fields’ Fireside Cookies (1969) presents two young women in swimming suits sprawled on a rug in a kitsch, domestic setting. Quotidian items surround the subjects — clothing lies scattered across the floor alongside half-read books and burning cigarettes, while beside the glowing fire sits a coal bucket and household plant. Combining elements from disparate vocabularies, Field’s painting is a masterclass in exuberant, post-Pop figuration.

In contrast, Derek Jarman’s The Kingdom over the Sea (1987), strikes a darker note. One of his celebrated Black Paintings, it was created shortly after he was diagnosed with AIDS in 1986 and acts as an autobiographical visualisation of his psychological mindset at that time. Embedded into tar are various found objects such as a candle and smashed glass in which words have been violently scratched, acting as a metaphor for Jarman’s reaction to his diagnosis.

The late Luciana Martinez de la Rosa’s epic painting Pru Pru (1981) offers a homage to Manet’s Olympia. However, here the reclining nude female figure is accompanied not by a servant but the artist herself attired in a kimono-like garment, a nod to the influence of Japanese prints in the original work. One of the so-called ‘Blitz Kids’, the band of fashionable club-goers that dominated the cultural dialogue in the early eighties, this work embodies that spirit of assimilation and artful contrivance. Also influenced by 16th-century Florentine court portraitist Bronzino, de la Rosa´s canvases are anything but diffident; her vivid palettes include magenta, tangerine and